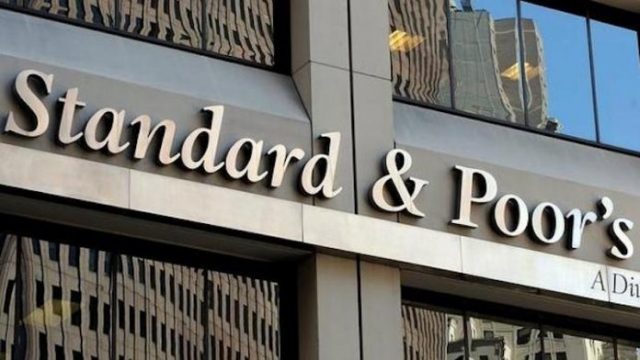 Standard & Poor’s (S&P), a leading global rating agency said the review of its outlooks to negative from stable on six Nigerian banks followed the outlook revision on the foreign currency rating on Nigeria on Feb. 28, 2020.

The rating agency stated that it does not rate financial institutions in Nigeria above the foreign currency sovereign ratings, due to the direct and indirect effects that sovereign distress would have on banks’ operations.

“The banking sector is exposed to inherently high economic imbalances because of Nigeria’s reliance on oil and its sensitivity to currency depreciation and high inflation”, S&P explained.

“This leaves banks vulnerable to asset-price shocks and asset-quality problems”, it further stated.

S&P had revised Nigeria’s economic outlook to negative from stable due to the rapid decline in the country’s external reserves.

In its outlook on Nigeria released on Monday, the global rating agency said about a third of the country’s foreign-exchange reserves (put at $12 billion) are derived from offshore investors who pilled to Nigeria’s debt.

S & P had in a statement hinged its decision on the fact that Nigeria’s economic growth remains weak, “slower than that of several peers at a similar rating level.”
Nigeria’s Gross Domestic Product (GDP) grew by 2.27 per cent in full-year 2019, compared to 1.91 per cent recorded in the preceding year.

But S&P in the statement stressed that weak growth, sizable public debt and external pressure were all weighing on Nigeria’s credit worthiness.
It noted that the country’s foreign exchange reserve levels have fallen from $45 billion at mid-year 2019 to $38 billion at end-2019 and $36.5 billion in February 2020.

“The Central Bank of Nigeria has been issuing Central Bank of Nigeria (CBN) bills, which have attracted foreign investors. About a third of foreign-exchange reserves are derived from non-resident holders of these CBN bills, positions we consider to be vulnerable to a change in investor sentiment.
“Owing to the late passage of the budget in 2019, government funding pressures resulted in increased financing from the central bank through overdraft facilities. As a consequence of these pressures, we are revising the outlook to negative from stable,” it stated.

It, however, said it might lower the ratings if “Nigeria’s international reserves decline markedly, external debt rises significantly faster than our current assumptions or if our projections of gradual fiscal consolidation do not materialise.

“We could raise our ratings if Nigeria’s economic performance were to strengthen significantly, forex reserve levels rose or if fiscal deficits were to reduce faster than we project.”
“In October 2019, Nigerian local non-bank participants were restricted from participating in CBN auctions, which subsequently resulted in a larger portion of CBN bills being held by non-residents (estimated at about $12 billion or one-third of reserves).

“These holdings could be subject to changes in foreign investor sentiment and a potential sell-off, thereby creating risks to current reserve levels. Given these risks, we have added CBN bills to general government debt. Therefore, our estimate of general government debt, net of liquid assets, now stands at an average of 39 per cent of GDP in 2020-2023,” it added.

The rating agency noted that Nigeria’s growth rates remain low relative to peers with similar wealth levels, adding that the country’s GDP per capita growth has been negative in dollar terms.
Nevertheless, it viewed the approval of the 2020 budget in 2019, prior to the start of the fiscal year, and much earlier than recent years, as favourable for budget execution and capital projects.

“Increased foreign currency flows into the market and a relatively stable exchange rate have supported a slight rebound in non-oil sector growth. In the fourth-quarter of 2019 the economy grew 2.6 per cent, the strongest expansion since the third quarter of 2015.

“The non-oil sector grew by 2.3 per cent. The extension of bank credit to the private sector is still weak. That said, in its most recent measure to boost credit, the CBN has encouraged banks to increase lending by maintaining a minimum loan-to-deposit ratio of 65 per cent.

“It has also excluded banks from participating in some auctions of government securities (where they earn a comfortable low-risk margin, which in turn discourages them to lend to the wider economy).

“In an environment of low oil prices, boosting non-oil economic growth and associated tax revenue have been priorities for the Buhari’s government. Absence of further structural policy reforms to stimulate economic growth, we forecast real GDP will expand by a modest two per cent or 2.4 per cent over the medium term. In per capita terms, this translates into negative growth over our forecast horizon,” it added.