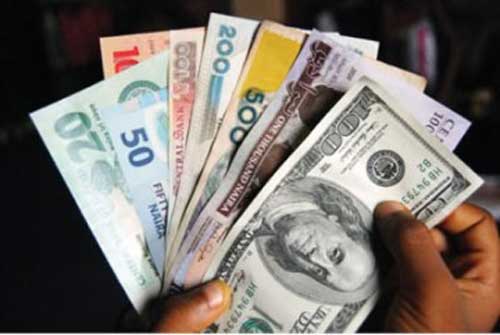 Nigeria’s local currency, the naira, weakened to 470 against the United States dollar in the parallel market on Friday despite the interventions of the Central Bank of Nigeria (CBN), in the official window.

The nation’s currency had traded at N465, N466 and N468 against the greenback on Tuesday, Wednesday and Thursday respectively, but fell on Friday to its weakest level in more than a month.

According to Bloomberg, the naira has lost all ground it gained after the banking sector regulator started weekly interventions, signaling the continuous existence of pent-up demand for the greenback.

The CBN had resumed dollar sales to licensed Bureau de Change (BDCS) operators in September after the federal government opened up international travel following the lifting of COVID-19 restrictions.

However, analysts had said last week that the naira would weaken in the parallel market and likely depreciate to 470-475 against the dollar in November and December as the supply of forex into the country would be further limited, with oil prices still under pressure, currently trading below $41 per barrel,

One of them, Bismarck Rewane, Managing Director, Financial Derivatives, had noted that the 2021 budget is likely to be revised, as a result of the impact of lower oil prices and higher expenditure and the #EndSARS crisis, which will deepen the economic crisis and delay the recovery.

Already there are strong indications that Nigeria’s mounting debt obligations amid falling oil prices may have started taking its toll on the nation’s economy to the extent of causing government’s inability to meet its recurrent and other non-debt obligations.

A pointer to this, perhaps, was the disclosure on Tuesday by the Director-General of Budget Office, Mr. Ben Akabueze, that about 428 out of the over 700 federal government agencies will not be able to pay workers’ salaries by the end of November.

Akabueze, who appeared before the Senate Committee on Public Accounts, said since the introduction of the new minimum wage in January this year, most of the agencies have been struggling to pay their workforce..

The scary revelation is coming less than two weeks after the Minister of Finance, Budget and National Planning, Zainab Ahmed, disclosed that the total public debts of Nigeria is projected to hit N38trillion by December 2021.

Ahmed, while defending the 2021 budget proposals at the sitting of the Senate Committee on Local and Foreign Loans, had stated: “The total public debt stock comprising the External and Homes debts of the Federal and state governments and the Federal Capital Territory stood at N31.01trn (USD85.90 billion) as at June 30, 2020.”

The report also reveals that N921.9 billion was used to service domestic debts between January and June 2020, while N288.6 billion ($759.6 million) was used on foreign debts, making a total of N1.21 trillion. This represents a 14.6 per cent increase when compared to N1.06 trillion spent in the same period of 2019 on debt service. The 2021 Appropriation Bill presented to the National Assembly recently by President Mohammadu Buhari, has a provision of N3.12 trillion for debt service out of N13.08 trillion expenditure proposed for the fiscal year

Worried by the outlook, the Nigerian Economic Summit Group (NESG), in August, warned that the federal government’s debt service to revenue ratio was unsustainably high and thus was affecting its ability to meet non-debt obligations.

In a statement released after a meeting of its board of directors, as signed by board chairman, Asue Ighodalo, NESG had warned, “The importance of dealing with the challenge of inadequate revenue is highlighted by the very high debt service-to-revenue ratio.”

The think-tank group also alerted, “While this ratio has improved to 72per cent in May 2020 from 99per cent recorded at the end of March 2020, it remains unsustainably high and undermines the ability of government to meet non-debt obligations such as the provision of infrastructure, human capital development and protection for our nation’s large population of vulnerable people.”

While speaking at a two-day National Summit on Tax and Development, organised by ActionAid Nigeria, in Abuja last week, lead director of the Centre for Social Justice (CSJ), Mr. Eze Onyekpere, said Nigeria is broke and is borrowing money to service old debts. According to Onyekpere, continued borrowing to service old debt is grossly inimical to national development, and would only leave behind a bleak future for the younger generation.

“Nigeria is broke, which is why we are experiencing all forms of financial crises, such as delayed salary payments, strikes, and other challenges. All that the government is doing is borrowing from Peter to pay Paul,” he said.

He stressed that Nigeria cannot expect to make meaningful progress in terms of national development if it continued the current spree of borrowing to pay back old debts.

Perceived gap between debts accumulations and realities on ground in the country in terms of required infrastructures and living standard has always generated controversy. Chairman of the Senate Committee on Foreign and Local Debts, Senator Muhammad Enagi in March noted: “The big question in the minds of average Nigerians aware of this fact is what did we do with the money? In other words, where did the money go? What do we have to show as a people for these huge debts?”

He explained that borrowing has always served as veritable financial platforms for many countries of the world in running their economies but judiciously utilising such loans for intended projects and servicing the debts appropriately have also been problems for developing countries like Nigeria.

An individual is classified as living in extreme poverty if the person earns below $1.90 or N855 a day. The data further show that there are more Nigerian males are in extreme poverty compared to their female counterparts. About 53,133,553 million men are living below the poverty threshold, while women are 51,564,303.

The data showed that the standard rate of escape from poverty is 0.3 people per second but Nigeria falls short of – with -4.4 people escaping poverty per second.

The figures by World Poverty Clock, however, are not totally in tandem with the latest figures on poverty released by the National Bureau of Statistics (NBS). NBS had in May 2020 released its 2019 report on “Poverty and Inequality in Nigeria” and put the figure of Nigerians living in extreme poverty at 89.2 million or 40.1 per cent of Nigeria’s population.

However, Minister of Information, Alhaji Lai Mohammed believes no government in the country’s history has alleviated poverty like the President Muhammadu Buhari administration.

“No government in the history of this country has ever methodically and seriously put in place measures aimed at addressing poverty alleviation and creating jobs for youths like this Administration,” Mohammed said recently. .

Like many countries, Nigeria’s economy is still dealing with the effects of the COVID-19 lockdown which lasted for five months from March to August. More than three months after reopening the economy, the country is facing serous recovery issues that leave it at risk of another recession, according to the state for budget and national planning minister Clem Agba.

“Is it likely that the (economic) growth in the third quarter will be negative or positive?, I think it is likely going to be negative considering the fact that the lockdown has just been lifted,” Agba said in August after Nigeria lifted the lockdown on businesses.

“But if we put on all our efforts, if we do what we have to do as Nigerians, then there will be room for recovery, it takes a joint effort, not only of government but all Nigerians to take our country serious, play our roles in order to ensure that we have quick recovery.”

According to the latest World Bank Nigeria Development Update (NDU), the collapse in oil prices coupled with the COVID-19 pandemic is expected to plunge the Nigerian economy into a severe economic recession, the worst since the 1980s

The report, “Nigeria In Times of COVID-19: Laying Foundations for a Strong Recovery,” estimates that Nigeria’s economy would likely contract by 3.2 per cent in 2020. This projection assumes that the spread of COVID-19 in Nigeria is contained by the third quarter of 2020. If the spread of the virus becomes more severe, the economy could contract further.

Before COVID-19, the Nigerian economy was expected to grow by 2.1per cent in 2020. What it means is that the pandemic has led to a reduction in growth by more than five percentage points.