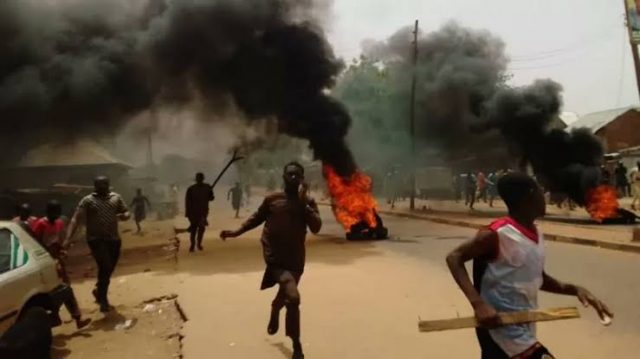 Aminu Tambuwal, Sokoto State governor, has imposed a 24-hour curfew on the state following a violence that erupted over the arrest of Deborah Samuel’s killers.

Samuel, a female student of Shehu Shagari College of Education, was killed by a mob over alleged blasphemy on Thursday.

Her killing had sparked outrage and condemnation across the country, with Nigerians asking the government to fish out the perpetrators of the crime.

Subsequently, the police command in Sokoto announced the arrest of two suspects in connection with the killing.

But on Saturday morning, some Muslim youths in Sokoto took to the streets to protest against the arrest of the suspects.

The protesters were armed with placards that read: “Release our Muslim brothers”, “Muslims Are Not Terrorists”, “Peaceful riot”.

“Following the sad incident that happened at the Shehu Shagari College of Education, on Thursday and sequel to development within the metropolis this morning, by the powers of section 176(2) of the constitution of the Federal Republic of Nigeria, and also section 15 of Sokoto state peace preservation law, I hereby declare, within the Sokoto metropolis, for the next 24 hours,” Tambuwal said.

“I appeal to the citizens of Sokoto state to kindly continue to observe law and order.”