Saudi Arabia has finally kicked off what could be the world’s biggest initial public offering more than three years after Crown Prince Mohammed bin Salman first raised the idea, and just three weeks after a plan to launch the share sale was abruptly shelved.

The Capital Market Authority has approved Aramco’s offering, according to a statement. The shares are likely to start trading in December, Bloomberg reported.

The approval shall be valid for six months, and the company’s prospectus will be published prior to the start of the subscription period, according to the statement.

Aramco, which pumps about 10% of the world’s oil, generated the most profit of any corporation last year with net income of $111 billion — more than Apple Inc., Google’s parent Alphabet Inc. and Exxon Mobil Corp. combined. The company was targeting a $2 trillion valuation — more than double that of Apple — but the kingdom is now ready to accept a valuation of $1.6 trillion to $1.8 trillion to ensure the IPO is a success, according to people briefed on the matter.

The sale is key to Prince Mohammed’s Vision 2030 plan to overhaul the Saudi economy and end the kingdom’s reliance on oil exports. The proceeds from the IPO will boost the firepower of the OPEC nation’s sovereign wealth fund, which already has investments in funds managed by Blackstone Group LP and SoftBank Group Corp.

Grabbing a role on the deal has been one of the most hotly contested mandates for global banks. More than 20 have been mandated, with the top roles going to firms including Citigroup Inc., Goldman Sachs Group Inc., and JPMorgan Chase & Co.

But the path to today’s announcement hasn’t been smooth. Prince Mohammed’s insistence the company is worth $2 trillion has been met with skepticism from the international investment community. The original plan to list Aramco in either New York or London has been dropped in favor of a Riyadh-only flotation.

To get the deal done, Aramco’s bankers will need hefty contributions from the kingdom’s wealthiest families, many of whom have already been targeted in 2017’s declared corruption crackdown that saw scores of wealthy Saudis held in Riyadh’s Ritz-Carlton Hotel. Authorities said they raised over $100 billion in settlements from people it accused of graft.

Aramco must also contend with the strengthening global movement against climate change that’s targeted the world’s largest oil and gas companies. Many fund managers are concerned the shift away from the international combustion engine — a technology that drove a century of steadily rising demand — means consumption will peak in the next two decades.

Aramco could be listed before the end of the year, in which case the world’s most valuable company will no longer be traded in the U.S. but on the Saudi bourse. The exchange lifted restrictions on foreign investors four years ago.

The company has been tiptoeing toward the greater disclosure required of publicly traded firms. Aramco published annual financial statements for the first time in April, ahead of a $12 billion bond sale. In August, the company hosted its first earnings call with analysts.

Financial statements for the first six months of the year showed that Aramco’s revenue and profit was higher than any other company’s. It also gives almost all of it back to the government through a mixture of taxes, royalties and dividends. Of the oil producer’s $46.9 billion profit, $46.4 billion was paid out in dividends.

In a bid to make the stock more attractive, Aramco already announced plans to pay $75 billion in dividends next year. It’s now considering raising that to $80 billion. At $1.8 trillion that would mean a yield of 4.4%, a decent payout in a low-interest-rate world, but still lower than the 5% Exxon investors currently get.

Aramco is still holding meetings with its bankers to nail down the details of the offer, and the dividend plan and the valuation could still change.

Investors who buy into the IPO have been guaranteed that the dividend won’t fall until after 2024, regardless of what happens to oil prices. Instead, Aramco will cut back on payouts to the government if it has to reduce the total dividend to less than $75 billion. 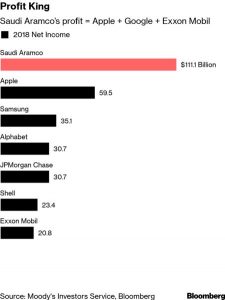 Saudi Arabia has also adjusted the royalty payments it charges Aramco. As of January, the royalty it pays for Brent crude prices below $70 a barrel is falling to 15% from 20%. The new rates are above previous ones on higher oil prices.

Investors will also have to weigh up how to factor in heightened geopolitical risks after attacks in September on Aramco’s crude processing facilities knocked out half its production. The company said it quickly restored output and never missed any customer orders, but the incident highlighted its vulnerability to regional military threats.

Whether investors are convinced that Aramco is worth $2 trillion will become clear once the company sets a price range for the shares. That could be in November.