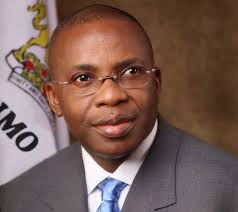 The result today is that in most cases neither the new projects nor the old ones for which those funds were initially earmarked have been completed.

This can be corroborated by the new administration’s press release in the Daily Sun of Wednesday, January 23, 2013 in which the State’s Commissioner of Finance was quoted as saying that “the previous administration of Ikedi Ohakim had secured a bond of N18 billion for capital projects such as roads, water and Oguta Wonder Lake, but when we came to power, we decided to prioritize our projects. Out of the N18 billion that was secured, about N6 billion had been spent and we met only N12.5 billion and we convened a meeting of all stakeholders and got their approval to approach SEC to change the use of the fund”.

The report further stated that the Commissioner disclosed that “the balance of the bond proceeds were channeled into critical areas of infrastructure development such as the building of 305 classroom blocks, building of ultra-modern general hospitals in the 27 local government areas of the state and construction of vital roads across the local government areas, informing that works were currently going simultaneously in the various communities”.

It is this penchant for mismatching funds that has led to non-payment of salaries and abandonment of projects which has become the rule rather than the exception. In my view, it is high time we took deliberate steps to tackle the issue of abandonment of projects started by previous administrations by new ones.  It is evil and it is a major root cause of our economic calamity.  It leads to nothing but wasting of resources.

Abandoning projects started by a preceding administration is a product of the “what did you achieve mentality”. This mentality makes it almost impossible for a new administration to think rationally. Instead of completing projects that will have huge multiplier effects, new administrations merely go for quick wins by duplicating mini road, electricity, water projects, brick and mortar structures etc which it can quickly complete in order to earn immediate applause from the people who are not in position to understand the tragedy of such idiosyncrasies.

Take a look at those states that have succeeded in show-casing visionary projects in the past sixteen years. You will discover that the administrations that posted monumental achievements did so by going for “shovel ready” projects started by their predecessors. You will also discover that they equally commenced visionary projects like seaport, rail, industrial parks, etc which will form “shovel ready” projects for their successors. Displaying uncommon leadership psychology recently, Governor Nyesom Wike of Rivers State was few days ago, reported by a newspaper thus “My administration will complete people-oriented projects notwithstanding who awarded them”.

According to Talmud: “It is not up to you to finish the work. But you are not free to desist from it”. When you complete projects not started by you, you make more economic impact than abandoning it and starting yours which your successor may also abandon.

As things stand today, non-payment of salaries is fast assuming the status of official policy. It is something that we must stand up against in Nigeria. It leads to economic and social calamity. I call on the legislature to come up with a bill stipulating that salaries not paid as at when due should attract interest on prevailing bank rate until paid. Salaries should be a first line charge for both the federal, state and local governments.

Quite often, you would hear some state governors pride themselves for not borrowing money from banks, even while they owe their civil servants several months of arrears of salaries in addition to non-payment to contractors for jobs duly done. By not paying workers and  contractors, the government is indirectly borrowing from them without paying interest.

Notwithstanding, I do not agree with the view that only the state governments are responsible for the stunted growth of our national economy. Let me also state that it is not also true that state governors merely cart away the funds into their private pockets. Such a blanket view is dangerous because it makes it difficult, if not impossible, for us to look at the issue through the proper political prism.

At the risk of being misunderstood, I can also state without any fear of contradiction, that the last federal administration is not entirely to blame for the present financial crisis which is chiefly as a result of the fall in oil prices and over which it had no control; coupled with our national penchant for Revenue/Project mismatch; edifice mentality, brick and mortar legacy syndrome, very high cost of running government, undertaking more projects than the economy can handle, project abandonment, etc.