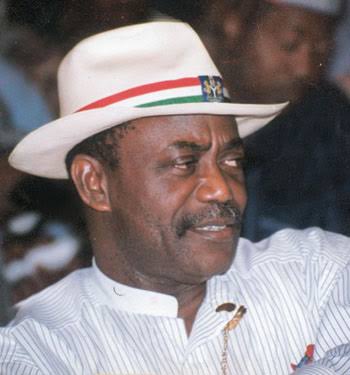 Odili was set up for the guillotine by a powerful coterie of political and business groups, an offshoot of the notorious political/industrial complex that was energized by the Obasanjo regime. This group was curiously headquartered right in the Presidential Villa and was anchored by the ubiquitous Andy Uba, a man who had emerged virtually from the blues to become Obasanjo’s main fixer, his veritable Man Friday and the ultimate Rasputin. It was Uba who provided the political cover for the conspirators – Mallam Nasir El Rufai, Mr. Nuhu Ribadu, etc, to concoct the notorious security report which fingered Odili for monumental corruption.

As Odili graphically recalled the incident in his emotionally charged book, Conscience and History, it was this fictitious report that Obasanjo used as an alibi to pull the plug on the Odili Presidential bid. And even when the Number Two slot had been universally agreed on for him as compensation, and after he had been persuaded to accept it, the cabal was not done yet. They still went after him with fiendish glee and browbeat Obasanjo to accede to the pressure of dropping him from the ticket, altogether. It was a classical coup. As former Ogun State governor, Gbenga Daniel, recalled the incident to me some years later, “… we were all sitting at the Eagle Square. It had been agreed to pair Peter with Umaru. In fact, the acceptance speech of the candidate was already prepared. I had seen a copy of it and Peter’s name was there as the Vice Presidential candidate. Then, all of a sudden; just before he rose to accept the nomination, Yar’Adua used a pen to cancel Peter’s name…”

My information is that Obasanjo has continued to rue that decision. A usually conceited man who hardly admits to mistakes or errors, he has nevertheless kept regretting that sublime art of treachery against a man who did him no wrong. In fact, Odili did not do any wrong to anyone. He was in the main, a very good man whose only crime was his effortless grace, larger-than-life image and amazing popularity across the various craters of Nigeria’s immense divide. He was clearly coasting home with the PDP Presidential nomination but for Obasanjo’s ambush. Then after the late Chief Ojo Maduekwe’s delegation had succeeded in persuading him to accept a place on the ticket, his traducers still bayed for blood. The political/industrial complex Obasanjo had spawned felt too timid to accept him on the ticket, because they feared that he would never be amenable to their control. They didn’t want to take any chances because they wanted a Presidency that would be under their thumbs. Odili stood between them and their wishes. He was the rock, a man who could not be easily pushed around. And they must have their way. Of course, they succeeded by tapping on a pliable alternative for the number two position – Goodluck Jonathan.

It is one of the abiding wonders of this perplexing country that despite Nuhu Ribadu’s subsequent public denial of the authorship of that notorious security report which had accused Odili of a sundry list of corruption allegations, some people still cling to the silly narrative of his alleged corruption. Interestingly, among some of those who mouth that patent falsehood are protégés of corruption barons often masquerading as journalists, anti- corruption crusaders and all other manner of highly compromised civil rights activists!

Odili’s retreat to the neutral corner was perhaps a self-defense mechanism by an evidently traumatized pugilist reeling from the onslaught against him. But retreating was not my preferred option. From the luxury of my ringside seat, I had wanted him to dig in instead and fight for his position. With me, as always, giving up is never an option. Like Prof. Jubril Aminu once said of me, “Emeka, you are a cricket; you never stay down!” Yea, I hardly ever do. I usually stick to the fight. Understandably, given my background, perseverance is the only way I know in order to succeed. But Odili is an elder, with vast experiences; intellectually, politically and even spiritually. Obviously, he knows that sometimes a man, a real man, can step back. After all, as the late Reggae maestro, Bob Marley famously sang, “He who fights and runs away lives to fight another day!”

As Chidi Amuta posited in his recent, albeit tendentiously argued treatise in ThisDay Newspaper, the time has finally come for Odili to put on the gloves again and return to the centre of the ring. But this time, it is not to engage in any direct partisan contest. Rather, it is to midwife a new era of peace, harmony and development in Rivers State. The need for such a sublime interventionist role is self-evident. Long before the civil war and even thereafter, Port Harcourt and Rivers state was the economic nerve centre of Eastern Nigeria in the main and all Nigeria, at large. As the unofficial capital of the oil and gas industry, it was the geese laying the nation’s golden eggs. Under the premiership of the late Dr. M.I. Okpara, it bloomed as the ‘Garden City’ and catalyzed rapid socio-economic development in the Niger Delta region and the areas making up the modern-day South East. Indeed, for so many Nigerian business and non- business investors and travelers, it was the go-to place. It ranked closely behind Lagos as Nigeria’s most strategic city, boasting of a thriving socio-cultural and economic life. It was the same development vision that Odili had followed during his highly successful tenure in office.

But today, the narrative has changed radically. The city is still there, but the gardens no longer bloom. The hustle and bustle is still there, but the atmosphere is often charged with tension. These days, the news out of Rivers State range from the ridiculous to the tragic. All manner of marauders wreak havoc on hapless residents. As Fela would sing, “they sow sorrow, sweat and blood…!”

From being a city-state of aquatic splendor, Rivers has descended into a Dante-like inferno. Violence and brigandage – sometimes political, often criminal, and at other times, plainly mindless – are the order of the day. No place or time, day or night, is safe. Every one lives in some level of fear as violence lays siege to the city.
However, the truth which must be told is that, sad as it is, the case of Rivers state is not unique. In the orgy of violence plaguing our country today, its case is not exceptional, really. Unknown to most people, the fact is that Lagos, yes, this our showpiece city-state, sometimes records more violent crimes than Port-Harcourt. Even neighboring Ogun State is not different. And recently, Katsina, Kaduna and Zamfara states have come to earn very infamous bragging rights for violence and criminality. So when some Rivers State government officials and indigenes complain of undue media sensationalism in the coverage of incidents that take place in the state, they may actually have a point. Port-Harcourt is not Nigeria’s most violent city. So the question which naturally arises therefore is “why is its case so seemingly notorious and attracting such loud public reaction?” The answer, to my mind, is politics. Rightly or wrongly, the public perception is that the violence ravaging Port-Harcourt and the entire Rivers state is largely linked to politics. The bitter squabble between the leading political elites exacerbates the ugly situation. All over the world, cases of mere criminality are usually law enforcement matters. Its tide often rises and ebbs depending on the efficiency of law enforcement agencies. But in a situation where criminality is an offshoot of politics, that introduces complex elements into a volatile mix and hobbles the law enforcement machinery.
It is beyond argument that violence and criminality have grievously affected Rivers State. It has besmirched its brand equity and tarnished the glow of Gov. Wike’s outstanding performance in office. Indeed, his giant strides to develop the state have been hobbled by the state of insecurity. Business cannot flourish in a state of fear. If lives and property cannot be secured, then of course, very little else can progress meaningfully. From the outside looking in, it is obvious that the dysfunction of Rivers State has run its course. The state stands the real risk of losing its esteemed position in the national pecking order as one of Africa’s leading commercial cities. The coming on-stream of Aliko Dangote’s refinery in Lagos has reduced its strategic position in the oil and gas industry. The time has come to change the narrative and structure a new paradigm. The political elite must rise up to the historic challenge of saving the state and restoring its hitherto pristine allure. There is, or should be a limit, to selfish political interests.

Odili and his multiple political children should wake up to a new reality. It is surely not coincidental that all the major actors in the political imbroglio were at one time or the other, cheerleaders of the Odili Restoration political family. It is time to convoke a special conclave of that family in order to fashion out a new roadmap for Rivers State. The state cannot continue to treat Nigerians to this cycle of bloodletting every election season. The last spectacle was tragic and must rank as one of the worst cases of political brigandage in Nigerian history. Showcasing much of it on live television further exposed the utter shame. My deep worry and indeed, the worry of most well-meaning Nigerians is that, given the current atmosphere of national insecurity, if nothing is done to halt the drift, the run up to the 2023 political season will be an open warfare.
If is for this reason that time and circumstances are beckoning on Odili – the long suffering political avatar and patriot of unblemished credentials – to rise up once again, in spite of himself, and provide leadership. As distasteful as he may find the prospects, yet it is his historic duty, indeed his choice. He chose this cause when he decided to put aside his stethoscope as a medical doctor and climb the soapbox. Of course, he has been betrayed serially, but that goes with the territory. Jesus Christ was betrayed as well. Yet, that did not stop the work of salvation. For Peter Otunuya Odili, nothing, neither treachery nor disappointment, is enough reason to keep him away from the call of duty. Who knows, maybe it was for a time like this that God chose him to be governor in 1999, against all permutations; and subsequently to sire all the current power brokers, the new kids-on-the-block: Nyesom Wike, Rotimi Amaechi, Uche Secondus, Magnus Abe, et al? As we say in The Redeemed Christian Church of God; “it is the making of the Lord…!”