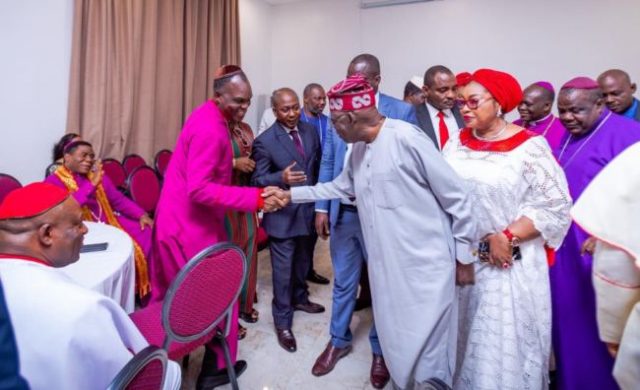 The Pentecostal Fellowship of Nigeria (PFN) has said it has no affiliation with the Pentecostal Bishops Forum of Northern Nigeria who met with Bola Tinubu, presidential candidate of the All Progressives Congress (APC).

Clergymen belonging to the group met with Tinubu in Abuja on Friday.

Tinubu and Kashim Shettima, his running mate, are both Muslims, a development that has angered the Christian community in the country.

Groups such as the PFN and the Christian Association of Nigeria (CAN) have also condemned it.

In an interview with TheCable on Sunday, David Bakare, deputy national secretary of the PFN, said: “There is nothing in PFN that is regional based like southern or northern pentecostal bishops.”

The PFN, according to Bakare, is a branch of CAN, adding that the opposition to the APC’s Muslim-Muslim ticket has not changed.

“The meeting between Tinubu and the Pentecostal Bishops Forum of Northern Nigeria has nothing to do with the PFN,” he said.

“I am speaking to you officially and authoritatively that the ranks of the Christian community, and of course, the PFN which I represent is not broken at all.

“The Pentecostal Bishops Forum of Northern Nigeria is not known to the PFN. The forum does not have any affiliation or relationship with the PFN that is registered with the government of this nation.

“The position of the PFN on same faith ticket still stands as it was in the beginning and we have not, for any reason, shifted our position on that matter.

“The PFN is not a part of the meeting with the presidential candidate that was highly politicised. We are however aware of the ripples in the public domain about this matter.

“I am speaking officially to clarify that the PFN has nothing to do with that organisation. We didn’t take such a decision, we have not met that political party and whatever we will do would be in the public domain.

“That group is on their own and has nothing to do with the real incorporated PFN. I looked at the photos (from the meeting) and the names. I could recognise about two people who are our members, but they speak for themselves.”

Bakare added that all pentecostal leaders in Nigeria speak with one voice.

“As a matter of fact, the PFN does not have any settings for bishops. What we have is PFN, we do not separate bishops of pentecostal from other clergies of pentecostal,” he said.

“Individuals can form an association but when it comes to the body called PFN, there is no change in our position and we have not authorised anybody to hold a meeting.”