Home Cover Story My deputy plans to embarrass me with fake documents, Akeredolu cries out 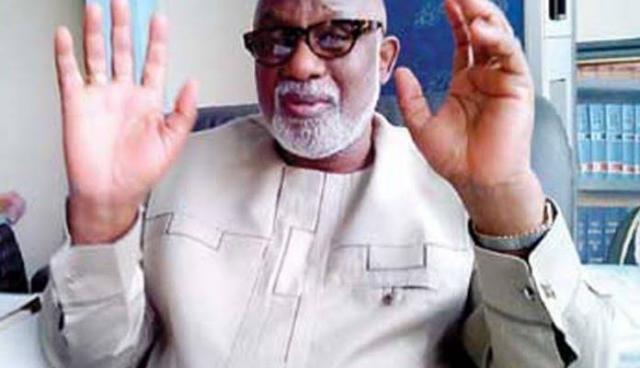 Ondo State Governor, Oluwarotimi Akeredolu, has raised the alarm over alleged plot by his estranged Deputy Governor, Agboola Ajayi, to use fake documents to embarrass and malign him
Agboola is the governorship candidate of the Zenith Labour Party (ZLP).
Akeredolu said the plot was initiated five months ago and aimed to harass himself, top government officials as well as members of his immediate family.
Akeredolu, who spoke through the spokesman for his campaign organisation, Olabode Richard Olatunde, said contents of the documents were unimaginable lies and imaginary concoctions from Agboola.
He said it was part of the many ignoble plots hatched to discredit him and the APC ahead of the October 10, governorship election.
The Ondo governor stated Ajayi engaged the services of two popular printers in Ondo town and Akure, the state capital, to print fake documents and clone receipts purported to have been presented by members of the Governor’s immediate family and senior government officials for transactions.
“While Governor Akeredolu and indeed, the APC family remain unperturbed over any such plot against the Project of Grace, it is, nonetheless, pertinent to alert the unsuspecting public, particularly the good people of Ondo State.
“For the records, the Akeredolu administration proclivity for transparency and accountability has made it a difficult task for anyone to malign, blackmail and discredit his administration.
“On our part, we shall inexorably, sustain the civil, issues-based and persuasive campaigns that had been enunciated from the beginning of this process.”
However, the deputy governor, Agboola Ajayi, said the governor was haunted by the injustice to the people of Ondo.
“The fact that the family of Akeredolu is running the government is an open secret to everyone in Ondo state and don’t need any document, either clone or otherwise to prove that. Like lawyers say that facts speak for itself.
“The wife of the governor has about six projects which she used to siphon money while the son is the consultant to the board of IGR and has access to N4billion stashed in an account where he got ten percent of the money.
“People don’t need document to show that the government of Akeredolu is the government of father, mother and son and in laws. This is why people are clamouring for his exit from the state.”