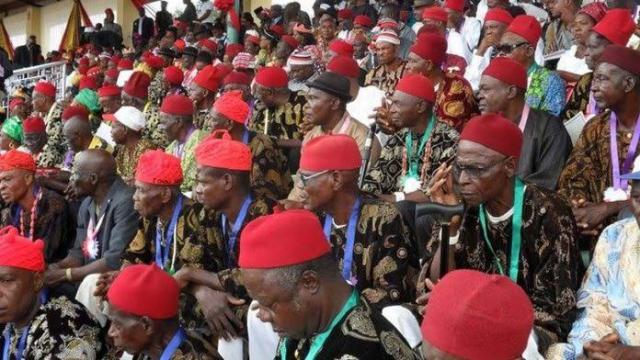 The Grand Patron of Enugu State Traditional Rulers Council, and the traditional ruler of Aji autonomous community in Igbo-Eze North Local Government Area of Enugu State, Igwe Simeon Osisi Itodo, has that a Supreme Court ruling cannot abolish the tradition and custom of the Igbos.
The Supreme Court had in a landmark judgement upheld the right of a female child to inherit properties of her father.
The apex court voided this tradition and custom on the grounds that it is discriminatory and conflicts with the provision of the constitution.
However, Itodo said that any attempt to implement such law in Igboland would provoke chaos and skirmishes among various communities.
He argued that the custom is unique to the people of South-East Nigeria and should not be touched.
“There are traditions which had existed before the law. Before the emergence of law courts, Igbos have their tradition and custom which cannot be wiped out because of Supreme Court ruling.
“There are so many things we have in common which cannot be stopped because of court verdict. “We are not against that ruling but we would not abolish our customs and traditions which all of us met. You can imagine a married woman coming back to her father to share his property with the sons.
“We would not allow it because it would breed chaos and troubles in our communities. If there are customs that allow such inheritance, let the people continue the practice but it won’t work in Igboland.
“In India, women pay the dowry but the reverse is the case here. We would not abolish our unique customs because of court ruling,” the monarch said.
In his reaction, the Bishop, Diocese on the Niger, Anglican Communion, Rt. Rev. Owen Nwokolo described the judgment as a welcome development.
He said that female children are not second class citizens and should not be treated like one.
“Female children have and should be accorded the same rights given to their male counterparts and therefore should not be discriminated against.
“This is not the first time the Supreme Court has given this judgment. Some years ago, the Supreme Court gave similar judgment but we are happy and we thank the Supreme Court for upholding the same judgment and there is no going back in females inheriting their fathers’ property.
“Families should put the judgment in practice and female children should stand up and claim their right. It is not only Supreme Court judgment but God-given right and they should take that right”.
Prof. Uzodinma Nwala-led Alaigbo Development Foundation, ADF, also welcomed the decision, saying, “in today’s world, daughters have proved their mettle in bringing sustainability, honour, and dignity to their families.
“Some of them have played the role of bread-winners for their father’s houses. So, it would have amounted to great injustice to continue to deny them the right of inheritance. They should be entitled to a fair share of their family wealth whether married or single.”