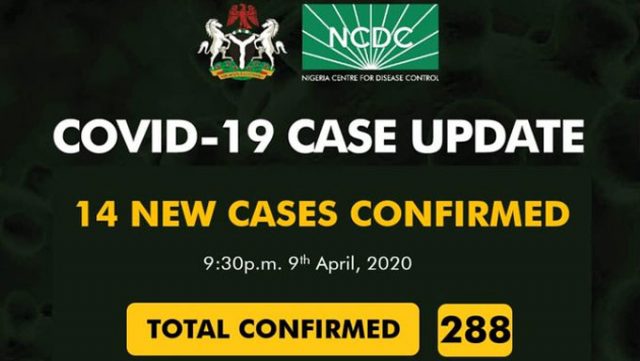 The Nigeria Centre for Disease Control (NCDC) has confirmed 14 new cases of coronavirus in the country.

This brings the total number of COVID-19 infections recorded in the country so far to 288.

The NCDC confirmed the latest figure – which rose from 276 – in a tweet on Thursday evening.

Fourteen new cases of #COVID19 have been reported in Nigeria: 13 in Lagos and 1 in Delta State

As at 09:30 pm 9th April, there are 288 confirmed cases of #COVID19 reported in Nigeria. Fifty-one have been discharged with seven deaths pic.twitter.com/DuP2SGUiTy

Yesterday, we erroneously reported 2 new cases in Bauchi. Following further review, we can confirm that these were repeat tests for previously confirmed cases.

We apologise for this error and remain committed to ensuring transparent and accurate reporting of test results — NCDC (@NCDCgov) April 9, 2020

Of the 14 cases, 13 were confirmed in Lagos while Delta recorded a new case – bringing the total confirmed case in the south-south state to two.

With the new confirmed cases, Lagos which has been described as the epicentre of COVID-19 in Nigeria now has 158 infections.

The figure in Lagos is almost three times the number of infections in Abuja, the Federal Capital Territory (FCT), which has 54 cases of coronavirus.

The NCDC also revealed that as of 9:30 pm on April 9, 51 patients had been discharged with seven deaths recorded.

It added that two new infections were erroneously reported in Bauchi as a further review showed that the cases were repeat tests for previously confirmed cases.

The health agency apologised for the error and promised to remain committed to ensuring transparent and accurate reporting of test results of COVID-19 cases.

Meanwhile, Governor Bala Mohammed of Bauchi State who was infected about two weeks ago has tested negative for coronavirus (COVID-19).

The governor, who was among the newly discharged persons, disclosed his current health status in tweets posted via his verified Twitter handle.

He thanked the people of the state, as well as religious leaders in Bauchi and elsewhere for their support and prayers while he was in isolation.

The governor also thanked the NCDC and the team of health experts in Bauchi tackling coronavirus for their efforts in curtailing the spread of the disease. (Channels TV)