Home Religion How christianity is slowly treading the path of extinction 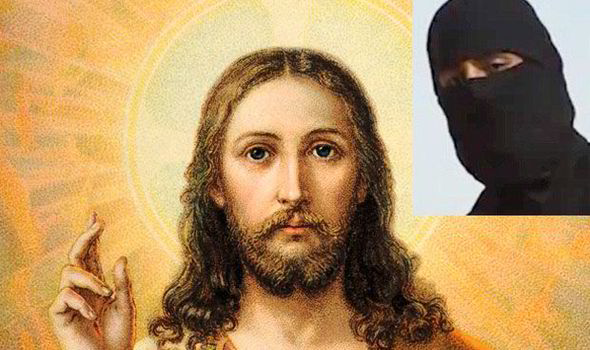 If everything goes according to plan, by the year 2050, in major developed countries of the world such as United States of America, Japan, United Kingdom and many other world powers, robots would be the ones running errands for human beings and Christianity would be an almost forgotten religion. Many of those robot-controlled cars will stop at Mosques while only very few will be parked in churches.

According to a study released by the Pew Research center, the size of almost every major faith except Christianity will increase rapidly particularly that of Buddhist, over the next forty years.
One of the major highlights of the study revealed that Islam, the world’s fastest-growing faith, will leap from 1.6 billion to 2.8 billion in the year 2050. At that time, Muslims will make up nearly one-third of the world’s total projected population of about nine billion people.
However, some critics of the study have stated that it will not be all bad for Christianity, as they expect it to grow too but in nowhere as close as Islam and Buddhism.

The Pew which is a non-partisan “fact tank” that regularly produces sweeping surveys of this kind without taking public policy positions, bases its projections on the age of populations, fertility and mortality rates, as well as migration and conversion patterns. Muslims are having larger families, retaining more members especially when one considers the fact that conversions are illegal in some Muslim nations and the fact that they are younger than the adherents of other faiths because more than one in every three Muslim is younger than fifteen.

When one looks at a country like Nigeria, there is a great tendency to believe that the study is right, especially when one looks at how the last Presidential elections played out in the country. The Muslim candidate; General Mohammed Buhari, a Fulani General of over seventy years of age, defeated an incumbent Christian President who appears to be far more educated and exposed than the incoming General. This speaks volumes.
In an interview with Ishaq Akintola, a Professor of Islamic Eschatology, who is also a Moslem right activist and a social commentator, he revealed that Muslims all over the world are bracing up for the new challenge of being the most populated religion in the world.

“What the study revealed is not strange or new either. For those of us who are not just Muslims but Muslim scholars, we have studied the religious trend for some time now and have long before now realized that Islam is about to become the most dominant religion in the world,” he said.
“The Nigerian presidential elections also proved to a large extent that Nigerians are tired of Christian leaders who have done more to divide this country along religious lines, than they have done to unite the country and better the lot of its citizens,” he added.

In another interview with Monsignor Gabriel Osu, the Director of Communications, Catholic Archdiocese of Lagos, he revealed that the findings of the study is really a reason to panic.
“Muslims taking over the world? Wow! This does not augur well for Christianity and other religions across the world. I do not doubt the authenticity of the findings of the study because if you look at Nigeria today, there seems to be more Muslims than Christians,” he said.

“This is because in the north where majority of Muslims domicile, you will discover that most women who in most cases, begin to give birth from their teenage years, end up giving birth to an average of five children. This means that they give birth to more children than Christians. This is simply what the Pew research group has extrapolated at the global level,” he added.
One of the high points of the study revealed that Muslims are expected to make up more than 50% in 51 countries of the world particularly Nigeria. This according to Apostle Johnson Suleman, the Senior Pastor of one of the largest congregations in Nigeria, it is a clarion call for Christians to wake up from their slumber.
In an interview with Hallmark, he revealed that many of those who practice Christianity do not do it with the same passion the Christians of the early church practised theirs.

“If you look at Christianity today, you will discover that it lacks the passion of the times of old. Many so-called Christians prefer to sit at home and watch Television instead of them going to church to fellowship with the brethren as commanded by the Bible,” he said.
“Many practice fetish Christianity whereby they see God as the miracle man instead of seeing Him as their Lord and personal Saviour. This is why some go to church when they have a problem which they need God to solve. The moment they get the solution, they simply disappear,” he added.
The Professor also asked all those castigating the outgoing President Goodluck Ebele Jonathan, a Christian president should desist from doing so because there is no record of him being a devoted Christian even before he assumed the seat of power.

“Which church the President attending before he became even the vice President? Was he a worker in any church or even a devoted ordinary member of a local assembly? The truth is that you and I do not know because there is no record of such in public space,” he said.
There is no doubt that if the findings of the study by the Pew on Christianity are anything to go by, it will very soon lose its position as the number one religion in a couple of decades.

However, ever since the Pew group released the results of the study on religions in the world, various reactions have been pouring in, most notably from the United States of America, the home country of the Pew Research Center.
According to a report on Popular Cable Television, CNN, the trove of religion data has some Americans acting as if the sky is falling on Christianity. However, many of these actions are coming from individuals and groups who fail to consider whether the headlines are accurate or the numbers say something else.

However, whatever the case may be, Christians all over the world are refuting the claims that Christianity as we all know it, is about to die. From America to the United Kingdom, Israel and Nigeria, so much effort is spent on rubbishing the claims that Christianity will be overtaken by Islam.
Whatever the case may be, one thing is sure. We have arrived at a time and age when religiosity and age tend to impact one another. They play a key role in every sphere of life. They determine what is and what is not. Religion is now very important in the scheme of things that it sometime determines who wins and looses an election.