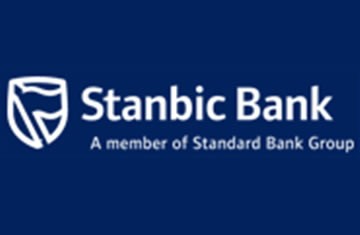 Recently SEC made a U-turn on Stanbic IBTC’s N20.4 billion right issue which it had earlier approved.
The suspension came in the light of alleged infractions by the bank on corporate governance. Both shareholders and the Board of Directors were at loggerhead about accountability in the use of the bank’s resources.

Mr. Usman Imanah, Corporate Communication Manager of the bank, said that the bank still maintains its stand on the issue and believes that necessary steps were being taken to resolve all outstanding issues with appropriate authorities as the case is still ongoing.
The leadership of the bank is alleged to have engaged in an expense which it was yet to get approved.
The resulting impact of the cost is that the bank’s profit has been lowered as a result of higher tax payment.

By so doing, earning per share went down giving the shareholders a cause to worry.
By this singular act, which seems to have been backdated to 2011, financial experts said that it has cast doubt on the quality of financial information coming out of the holding structure that houses bank.
If proven guilty, the bank may probably have to pay heavy fine; and its stock would plummet as market will price the bank appropriately.
For over a year, the bank’s stock price on the Nigeria Stock Exchange, NSE, had maintained premium position reinforcing the positive perception of its management.
However, it now appears this was a contrived performance in view of the current controversy dogging the bank.
National Office for Technology Acquisition and Promotion (NOTAP) refused to grant Stanbic IBTC approval for making payment to foreign technical partners for a job that could be done by Nigerians. Subject to this, shareholders see no reason to hold the money and go to market for capital injection.
In their petition, members of Trusted Shareholders Association alleged that billions of naira was yet to be returned to the profit and loss account of Stanbic IBTC Bank after it had been appropriated without disbursement.

Given the circumstances painted in the whole saga, the bank’s numbers are crying foul for all it is worth until proven otherwise.
Meanwhile … Stanbic IBTC seems to have stepped overboard with the bank’s rising non-performing loans which are expected to take so much out on its financial year 2015 profitability.
How did it happen that the bank’s portfolio of non-performing loans skyrocketed that high in the first half of the year?
Though the bank expressly showed it needed more capital injection, perhaps to boost its tier 1 capital ratio, but the approach was suspended by the market watchdog.
This want of funds would put strain on its ability to do business for the period.
And again, as earlier noted, allegation for accounting infraction will undermine whatever strategy it puts forward to weather the storm.
It won’t go away that easily for a stock that is already trading at premium to book value. Stakeholders expressed their dissatisfaction with companies with foreign affiliation transferring jobs that can be done locally abroad.

Share performance outlook
The bank’s stock is trading at premium to book value, which is averagely over-priced compared to its peers. Without mincing word, the bank’s stock may provide no growth potential given the quality of its underlying earnings assets.
This, coupled with the fact that the bank’s results from 2011 to 2015 may be subjected to review by the Financial Reporting Council and risks price draw down.

The bank’s earnings per share retreated by 46%, from 148 kobo in the first half of 2014 to 80k at the end of equivalent period in 2015.
Unfortunately at this time, recovery in present economic situation is not going to be easy to achieve so soon.
The sky seems to have gone red for the bank which has always enjoyed some leverage and guided by its parents standard.
Stakeholders are already on their toes over how banks will make money in 2015. The constricting banking business is already a trending issue among Broadstreet junkies.
Consensus among some financial sector experts on the impact of increased regulation is that banks’ profitability will experience a run-down for 2015 financial year end. 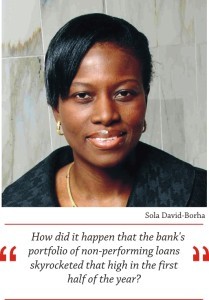 From near-zero Commission on Turnover to restricted foreign exchange regime or from quote driven to an order driven, garnished with reduced net foreign exchange trading position limit to 0.5% of shareholders funds, banks are increasingly being left with little elbow room to operate.
Add to this the regulator’s harmonisation of the cash reserve ratio on both public and private deposits at 25% worsened by Federal government demand that Ministries, Department and Agencies should adopt single treasury accounts (TSA) for related revenues, and banks’ woes are comp;ete.
The reduction of CRR to 25% may have negligible effects on liquidity and business expansion would still remain strained.

High risk sectors exposure could undermine quality of earning assets
Stanbic IBTC is quite exposed to oil and gas and manufacturing sector with huge potential loan default in the financial year end 2015.
The risk is that companies in oil and gas are cutting back on capital investment which means that seemingly profitable business are not taking place, at least in the short term given the trend in oil market.
In its recent quarterly results, sliding economic performance tamed the bank top line while increasing operating expenses and provision for structured bad deals; or rather good deals turning have bad cutback the bank’s profitability.
Profit didn’t just go downhill; it went down massively raising an eyebrow as to the bank’s key performance indicators around economic operation, efficiency of its processes and effectiveness of outputs.
Like some of the bank’s peers, increased regulation impacted interest income giving the bank a weak profit outlook in the second half of the year.

Something missing between revenue and profit
The bank recorded 11% increase in gross earning to N68.3 billion at the end of its first quarter 2015 from N61.7 billion in the comparable period 2014.However, in spite of the 11% load up in earnings the bank’s pretax profit went down massively.
It was found that interest expenses gained momentum far above what interest income generated by the bank could compensated for. While interest expenses grew by 78% from N11.02 billion in 2014, it had swelled up by the end of first half 2015 to N19.58 billion. The magnitude of the growth is alarming, and a cause to worry about.
One may ask, isn’t that a penny wise pounds foolish way of doing business? This however provide a clue as to one of the reasons the bank decided to go to market for capital injections.

The bank somehow needs to maintain adequate capital indeed.
Being a strong player at interbank market, one of the most expensive ways of funding banking business at the moment, it could well be attributable to the bank’s rising cost.
The bank financial scorecard said that in the half year ending June 30, 2015 Stanbic IBTC Holdings Plc reported a profit before tax of N9.537 billion, which was 52% reduction compare to half year result it had achieved in 2014 from N19.95 billion.
Also, the bank after tax profit of N9.695 billion was lower compare to the comparable period by 40%. 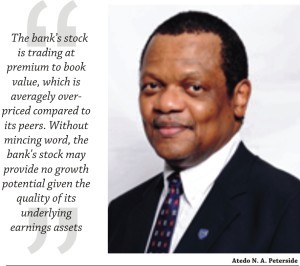 This was because of the bank favourable tax position. It tax payment went down by 104% between the comparable periods.
The leadership lost touch with cost management in the period. The bank was unable to maintain the impact of its growing gross earnings down through to bottom line. It was caught in-between a whopping 449% leap in impairment charge and stable fee and commission income.
Operating expenses moved up by 7%, which include a 3% increase in staff cost from N13.05 billion to N13.47 billion while other operating expenses jerked up by 9% from N16.06 billion to N17.03 billion.
The bank did well at 7% increase in operating expenses because headline inflation trend far above, as it has moved up at least on the average of 10 basis point month on month since December 2014.

But its earnings assets impaired massively, as credit impairment jerked up as much 449% to N7.90 billion in the first half 2015 as against N1.438 billion in the comparable period 2014, coupled with 14% drop in trading revenue.
The increased credit impairment charges cast doubt on the quality of its earnings assets; perhaps its full year may well see the same trend.  Analysts said that the increase in impairment charges is quite significant when considered against the fact that total loan to customers grew marginally by 3% at N409.902 billion as against N398.604 billion reported in the comparative period of 2014.
However, loans and advances to other banks rose sharply by 158% from N8.814 billion in the first half 2014 to N22.709 billion in 2015. This could mean that the Bank is increasing its presence in interbank activities while moderating lending to businesses, perhaps as a result of increasing commercial loan delinquency as can be deduced from the astronomical growth in loan loss provisioning.
Customers’ deposits expanded by 22% to N601.73 billion from N494.94 billion at the beginning of year 2015; indicating that the bank is still enjoying strong customers’ confidence.

Then, interbank deposit moved down significantly from N59.12 billion to N32.18 billion which represent 46% reduction year on year on account of the industry cash trapped situation.
Further to that; the drop in trading income is a sign that the ongoing foreign exchange control regimes is having some negative impact on bank’s capacity to make income from this revenue stream.
This could drive DMBs to devise means of increasing income through fees and charges on banking transactions.  However, for Stanbic IBTC income from fees and charges in the first half of the year was almost flat at N19.035 billion relative to N18.964 billion reported in the comparative period in 2014.

Though the bank profit performance went down, its operating expenses fast expanded which was in line with average inflation rate. Reduced economic performance may however mean that growths remain delusionary in the third and fourth quarters 2015.
With limited potential to grow as it is currently operating at about 84% loans to deposit ratio which explain another reason for right issue as a way to inject additional capital into the business.
As earnings season is fast approaching, analysts are projecting that Stanbic may hang in the middle as it declares it third quarter result unless it has clean books.