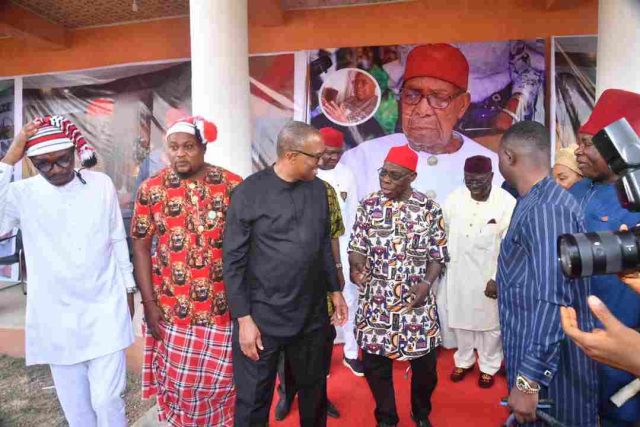 A major part of the reason the north has seemingly continued to dominate national politics of Nigeria is, according to informed commentators, the disunity and division between the Igbo and Yoruba, the two major geo political zones in the south.

However, this clear misunderstanding between the two major tribes may soon be a thing of the past as South East and South West leaders have agreed to work together for the election of the Labour Party, LP, presidential candidate, Mr. Peter Obi, in next year’s general elections.

The sole aim of the meeting was how both regions can close ranks to ensure that Obi, an Igbo, is voted the next president of Nigeria in 2023.

Adebanjo had stated it over and over again that his support for Obi was hinged on equity,  justice and fairness, insisting that it was immoral for power to stay in north back to back after eight years of President Muhammadu Buhari.

The Yoruba leader also said it was a total lack of concern for either a South westerner or South-South to be seeking to be the president of Nigeria in 2023 (after eight years of Olusegun Obasanjo and six years of Goodluck Jonathan) when the South East had yet to get a slot.

He insisted that the South West where he hailed from and the South South had at one point or other since the return of democracy in Nigeria, produced the president and vice president, so they should support the call for an Igbo to be elected president in 2023.

Based on this, he claimed the most suitably qualified presidential candidate among the lots from the South East was Obi and called on the electorate to rally round him.

While many see it as a good strategy that can achieve its results, others argue it will still hit the brick wall like many other efforts  before it, put in place for political understanding between Ndigbo and the  Yoruba.

“I think the coming together of Igbo and Yoruba leaders and elders for the purpose of electing Obi president in the February 25, 2023 general elections is a  welcomed development.

“I agree with those who insinuate that the problem of Nigeria is located in the perennial disunity of the South East and South West. If the two geo political zones can work together, Nigeria will be brought to stability for growth and development”, Tobe Njoku, stated.

He added, “It is even more meaningful if it is remembered that this particular laudable project is driven by a Yoruba, Adebanjo. Again, it is even exciting when it is indicated that the beneficiary is Obi, the rave of the moment. For me it is a good development”.

The handshake across the Niger has been really elusive as all the other previous discussions and efforts on this matter either ended in chaos or never met its target.

“The meeting of the South East and South West leaders for political unity and harmonization is absolutely a thing of joy.

“The arrowheads of this beautiful move deserves our applause, especially as it will benefit an Igbo presidential candidate, Obi.

“However, I don’t expect this latest move to  produce any magic in terms of result. This is so because Igbo and Yoruba nationalities, in the past, had had this handshake across  Niger but nothing good came out of it.

“There was the UPGA merger that AG and NCNC produced in the First Republic. Yet,  nothing much was  achieved.

“There was the Second Republic attempt that where the NPP and UPN agreed to work together and the alliance was known as PPA but  at the end of the day, the great Zik and iconic Awo couldn’t see to the East and West political unity. Of course, both men were still the gladiators in the First Republic.

“So, my fear is, in spite of the  attractive idea which is very exciting, the project may not see the light of the day due to some irreconcilable differences between the East and West”, Chima Njoku stated.

Probably, it must be noted that while the First and Second republics’ attempts of the Igbo-Yoruba unity attempts were based on party  pragmatism, and so it crashed, the current alignment is purely on the candidate, therefore it is likely going to work out.

However, unlike previous attempts at unity between East and West, when the main antagonist was the north, in 2023, it a southerner, and particularly, South westerner, who is a presidential candidate of the ruling APC, Asiwaju Bola Tinubu, and representing Northern interest.

Although, the leaders are in support of Obi for the purpose of justice, the Yoruba political class is interested in having power and Asiwaju Bola Tinubu is the strongest political force in the and controls the richest state in Nigeria, Lagos.
It is yet to be seen how this new push for Obi by Yoruba leaders can be realised in view of the ambition of Tinubu. The leaders have little political value except moral authority.

So far, Obi has been receiving massive support not just in the South East or South West zones but across all the regions of Nigeria, thereby creating the impression that Igbo, Yoruba leaders meeting on Obi may eventually be a jinx breaker.