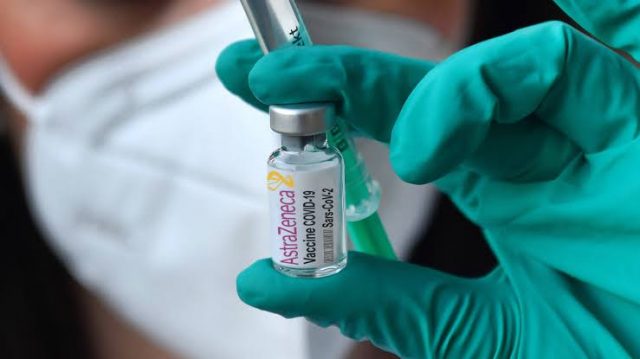 The Federal Government’s ‘Strategic Vaccine Roll-Out’ programme aimed at vaccinating at least 50% of eligible Nigerians against the Covid19 plague by January 31, 2022, is currently plagued by human and operational challenges, Business Hallmark can report.

It would be recalled that Nigeria received the first consignment of about 3.92 million doses of the Oxford-AstraZeneca vaccine on March 2, 2021 through the COVID-19 Vaccines Global Assess Facility (COVAX), with the Federal Government flagging off the vaccination exercise almost immediately.

Less than two week later, the Lagos State government on March 12, flagged-off the first phase of the vaccination exercise in the state, with priority given to front line health workers to first access the 507,00doses it received from the Federal Government.

The state governor, Babajide Sanwo-Olu, while speaking at the venue of the ceremony, urged residents of the state to disregard rumours and misinformation against the vaccine, describing them as unfounded.

“The Federal and Lagos State Governments have done due diligence to establish the vaccines efficacy and safety”, the governor had assured.

However, checks by BH in many vaccination centres in Lagos show that the exercise is dogged by multiple challenges, including hesitancy displayed by many Nigerians towards the vaccine, unavailability of second doses for recipients of Oxford-AstraZeneca vaccines who had received the first jabs, payment of a ‘token’ by recipients to buy air time to help upload their data into the Primary Health Care Development Agency’s (NPHCDA) portal and claims of non-payment of health workers allowances engaged for the exercise despite the availability of vaccines and billions of dollars spent by the government on the exercise.

One of the challenges observed by our correspondent during the visits, is the nonchalance of many Nigerians to the vaccinne. Their negative attitudes to the vaccine, it was learnt, is born out of rumours and misinformation against the vaccine by anti-vaccine crusaders who poisoned the minds of millions against it, as well as the low casualty figures recorded so far in the country which make many Nigerians not to take the disease seriously.

“Don’t mind them (government). They just want to make money from it. Please, can you tell me how many people have died from the virus.
“As far as I am concerned, I have not seen anyone killed by the disease. It is just ‘Ako Iba’ (chronic fever) and nothing more”, declared Mrs. Sarah Abaniwonda, a trader at the Jankara Market in the Ijaiye-Ojokoro area of the state.

Apart from not taking the disease and the vaccination exercise seriously, many Nigerians are also of the views that the vaccines were made by some ‘forces of darkness’, led by Microsoft’s founder, Bill Gates and former American president, Barack Obama gunning for the ‘New Order’.

“A real Christian should not take the jab”, said Prophet Samson Ademola, a pastor with the Christ Apostolic Church (Mountain of Deliverance) in Agege.

“It is the sign of the beast as foretold in the Book of Revelation. The intention of those behind it is to control the world by implanting a chip in the body that will enable them to control people from a centralized computer system manned by the devil himself.

“Already, you can’t do anything again without getting the vaccine. To travel abroad, enter public/ government offices, attend social events, you need to get the vaccine.

“They are even contemplating making it compulsory in churches. Can you believe that? God will not allow them. He will destroy their evil machinations like he did with theTower of Babel”, the cleric decreed.

Available data obtained by BH shows that in the last three weeks, the nation averaged about 150,407 doses administered daily.

As at December 8, atleast11,193,780 doses of Covid19 vaccines have been administered in the country. According to the NPHCDA, while 6.6 million Nigerians had taken the first dose, only 3.5 million had been fully vaccinated against the virus.

This means that just over 1.75% of the country’s estimated 200 million-population has been fully vaccinated.
If the trend continues, it will take268 days (a full year) to administer enough doses for another 10% of the population, making the FG’s 50% vaccination target by January 2022 a dream.

Lamenting the low vaccination rate, the Executive Director of NPHCDA, Dr. Faisal Shuaib, said Nigeria needed to push vaccination rate to about 70 percent of the nation’s population to reach herd immunity against the virus.

“6.6 million Nigerians have taken the first dose. Another 3.5 million of the figure have taken the second dose. We are targeting 70 percent because the current numberi slow.

“The risk this poses to the nation is that it would give a chance formutation of the virus.The virus mutates in an environment where herd immunity is low.”

Apart from the apathy displayed by many Nigerians towards the vacination exercise, another challenge haunting it is the non-availability of vaccines for those already given appointments for second doses.

Our correspondent observed during his visits to some centres in Lagos that many Lagosians coming for the second dose of the vaccine were told to come back later.

Particularly affected are those who came for the second jab of the Oxford-Astrazeneca vacine.

“This is my fifth time here without success. I took the first jab on July 29 and was given August 29 appointment to come back for the second jab.

“When I went bank on the appointed day, i was told that AstraZeneca vaccine is not available and that I should come back later. When I protested that I must be given from the one being given to people I met on ground, I was told that I can’t receive is as those I met were receiving Moderna.

“Since the two vaccines can’t go together, I was advised to come back again after one of the officials asked me to drop my number so that they can call me when my brand is available.
“After waiting endlessly without getting a call as promised, I visited again on September 29, two months after the first jab. Yet again I received the same news. ‘No AstraZeneca vaccine on ground’.

“I have been coming here every month since August to no avail. This is my fifth time here after receiving my first jab in July. And they are still telling me that I should come back. I don’t know what to do know’, a federal civil servant with the Ministry of Works and Housing, Mr. Chude Echezonanna lamented.

An official of the Isokan Health Centre in Ijaiye-Ojokoro owned by the Lagos State government, who did not want her identity revealed, told BH that what they are currently administering is the Moderna and Pfizer vaccines.

“I won’t mince words with you. We are out of stock for some vaccines, particularly the AstraZeneca brand. The brand represents over 70% of what the nation got to be administered to it citizens. So, you will understand the present dilemma we are in.

“We first started with AstraZeneca in March. And millions of Nigerians received the vaccines. And we didn’t receive another supply until August ending. Unfortunately, the supply was low and if couldn’t go round during the second phase of the AstraZeneca exercise between August 30 to September 24.

“Though, we asked people to come back a month later, the first comes were the lucky ones. The vaccines didn’t go round as we soon ran out of stock. Since then, we have been waiting for another set of supply.

“What we have in stock now is Pfizer and Moderna vaccines. People should not panic. I advise them to exercise patient as they would be informed the moment the vaccine is available” the health worker assured.

Another irregularity observed during a tour of some selected vaccination centres, is the payment of ‘data token’ by Lagosians to aid their vaccination process.

Many Lagosian who spoke with our correspondent disclosed that they paid between N200 and N5,000 in order to be vaccinated.

“I have to give the guy handling the device N5,000 to purchase the data he will need to impute our information when I found that he had non to work with.

“I was not forced or mandated to give, but I gave out of my own free will. We should praise and encourage Nigerians health workers at the forefront of the vaccination exercise.

“They are not well equipped or mobilized to do the job. Despite that, they are doing their possible best. The government should do the needful by providing the infrastructure needed for the success of the exercise. It is not enough just providing the vaccines without the logistics to make it go round”, a community leader in the Ojokoro area of Lagos told BH at the Ojokoro Health Centre located at Ahmadiya.

An ad-hoc staff employed by the state government to upload people’s data to the NPHCDA portal, confided in our correspondent that he and his colleagues had only been given money for data twice since they were recruited in March.

“We are always told to go on working, that our allowances for data will be paid. Even the two times we received it, it was war. We have to resort to appealing to kind hearted Nigerians to bail us out with whatever they can spare. While some help out, most people abuse us.

“My stipends have only been paid three times. They (government) is owing us outstanding of five months. We had planned to embark on strike on December 7, but we shelved it after some concerned stakeholders intervened.