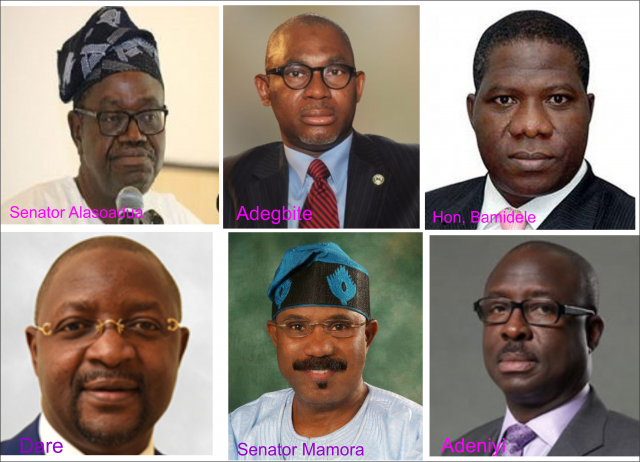 President Muhammadu Buhari sent the much awaited ministers list to the Senate for confirmation last week but some of the nominees for ministerial positions from the south west zone of the country have been criticized as recycled people and mere political patronage and reward for contribution to his election. Out  of the  43 names  sent  to the  Senate seven of them are  from  the  South  West Region of Oyo,  Ondo, Osun, Ogun, Ekiti and  Lagos with  one  nominee  from each  state  except  Lagos  which  has  two.

Since  the  list of the  ministers  came  out, it has  generated  so much  controversy as it was  believed  that  the  president  only,  again paraded old  recycled  politicians who may not  have  fresh  ideas to drive  his  government  at this critical  period  when  he needs fresh  initiatives from younger  and  vibrant  people. For this reason  it was  argued  that he  should  have  injected much  younger  people  to his cabinet  this time  around.

It was  further  argued  that there was  no need  for  the  president to have  taken  such  a long  time  to come  out  with  the list when  he  knew  that  he would  still  parade  old  recycled politicians as  he  did in his  first term, when he  took six months  to announce  his  cabinet.

It was  argued  that what  he has  done  showed  that  he  was  short  of ideas  and  that  the  nation  should  not expect  something  better than  what  was experienced in his first  term.

Just  as  the  rest  of the  country  was  worried,  the  people of the  South  west  are  feeling  the  same with  the  list  which  people  say  ought  to have  excluded  some  non  performing  ministers while some of the  new  names  who are  controversial..

It was  argued  that  some  of those  picked  from the  region  are  recycled politicians who  may  not  have  much  to offer  in this  dispensation of Buhari’s government. Of all  in the  south  west,  only  one  of them seem not to have  been  in the  political  circle  and  public glare and that  is the  nominee from  Oyo  State.

Otunba  Richard  Adeniyi  Adebayo, from Ekiti  state  was  the  first  governor of Ekiti  state from 1999 to 2003, and had  been  chairman  of several  boards  and  Deputy  National  Chairman  of the All progressives  Congress  (APC)  South. He  is one  of the  strong  allies of The  national  leader  of the APC, Asiwaju  Ahmed  Bola  Tinubu, whom  they  served  together  as  the  Alliance  for  Democracy  governors  from1999 to 2003. Since then, they have been together.

It was  argued  that  Otunba Adebayo  who  is highly  respected  should remained independent instead risking the slippery banana peels of this regime already losing much of public confidence and trust.

As people in the  state  said,   he should  have  given the  slot  to a much  younger  politician; however it was learnt that he was only doing the bidding of his ally, Tinubu, who may be nursing presidential ambition. The nomination was also meant to compensate him for losing the governorship to Fayemi in September 2018.

One  of the strong  member  of ADC in Ekiti   Mr Adeniji  Oguntade  said that  with  the  political  clout  of the  former  governor, he  should  have nominated someone  and  remain  a leader  at the  background  as  he used  to  do in the  past, when  he  was  seen as father  figure  in the  politics  of Ekiti and  the  south  west. But  the  governor  of the  state has  congratulated  him  and believed  that  he  would  use  his  wealth  9f experience  to help  the  President  move  the  county  forward.

Also,  Senator  Opeyemi Bamidele, who is now a senate from the state, said  that  the  country  needs  the kind  of Otunba  Adebayo  at this  moment  of the  nation’s  political  history. He therefore said that  he has  no doubt, his  brother  would  do well. Some  people  however  said  that  Adebayo’s  nomination  was  nothing  more  than political  patronage.

Ogbeni  Rauf  Aregbesola from  Osun  state  is  another  close  associate of Bola Tinubu and  he  is regarded  as the most  controversial  of all  the  seven  appointees from the  South  west. As governor, his state has always produced the highest votes for Buhari in the region. Also, there has been insinuations that he had wanted to go to the federal level after his tenure preferably as senator; it was alleged that Ambode’s refusal to facilitate his ambition was the source of his troubles.

He worked with Tinubu as commissioner for works for eight years. He  was a strong  political  figure  in  Lagos before  he  governed  Osun  state  for eight  years  where  his tenure was  enmeshed  in  several  controversies. It is generally believed that he made a complete mess of governing the state as he left it almost run down and debt ridden.

The   opposition  believed  that  his appointment  as a minister amounts to an aberration  with the  way  he  ran  Osun  into a debtor  state and  that his tenure  as  a minister  would  not  change anything. It was  said  that he  would  not  perform and  that  he  may end  up messing  the  whole thing  up  with  his arrogance  and  brashness.

The  chairman  of the  PDP in Osun State, Mr. Soji Adagunodo said  that “Aregbesola  is an aberration  with  the  way  he  ruled  Osun  state  plunging  it  to serious  debt, wasteful  spending with  the  rascality  he  ran the  state aground and  his  behavior  as a dictator, saying  people  with  such  temperament  are  not  needed  at the  federal  level where  it would  be  dangerous to implement  project  and  policies  that  affects  over 200 million  people  irrationally as he  operated  in Osun.”

Adagunodo  argued  that  the  people  of Osun  would  not  forget  Aregbesola  as  the  first governor  to  introduce  half  salary  to workers. The  governor  of the  state  through  his  press  secretary  Niyi  Adesina congratulated  him,  saying that  they  were  happy  for  his appointment. But  a member  of the  APC confided  in BusinessHallmark that

Governor  Oyetola  has  every  reasons  to be happy  because  the  ministerial  job would  not  give  him time to delve  into  the  affairs  of his government as a godfather.

appointing Aregbesola the  former  minister of health professor  Isaac  Adewole who did well  should  have  been retained  but  politics  was  put  into  play because  of his  link  with  former  governor  of the  state  prince  Olagunsoye  Oyinlola and the  former  president Olusegun  Obasanjo  who  has  been very  critical  of the  present  federal  government  of  president  Buhari.

Architect  Olamilekan  Adegbite from  Ogun  was  the  former commissioner under  Governor  Ibikunle  Amosun. His nomination  has  further  deepened  the  crisis between the  two factions  of the  APC in the  state  especially the  Amosun  and  the  Osoba  factions

The  APC  caretaker  executive  led  by Chief Yemi  Sanusi indicated  that  Adegbite  was not  the  party’s candidate and  choice, while the  people  of  Yewa  too  felt  that they  should  have  been given  the  slot  since  they  lost  the  governorship  again  to another  zone.

Feelers  from  Ogun  indicated  that  President  Buhari  used  the  ministerial  appointment  to compensate  Amosun  whose  candidate  lost  the  governorship  to the  Osoba’s  camp  so that  he  would  not feel totally  humiliated  politically  in Ogun State.

In his  own reaction  a former  Senatorial  aspirant  and  strong  politician in Yewa  Ogun  west said  that  they  deserve  the  ministerial  slot.  He  said though  the  president reserved  the  right  to pick  who  he  wants but  sometimes it is good  to use  geographical spread  for  appointments because  the  Yewa  people  have  always  been marginalised  in the  scheme  of things  in Ogun state.

Senator Tayo Alasoadua represented  Ondo central in the  senate and is said  to be  the  nominee  of Governor Rotimi Akeredolu. His  nomination  is already  causing  another  controversy  between  the  Governor and  the  other  faction  of the  APC which  has  been calling  for  the head  of the  governor, saying  that  he must  go.

But  the  governor  has  congratulated  him  saying  that  the  state  was  proud  of him. He too has  thanked President  Buhari for  appointing  him  and  called  on the  people of the state to rally  round  him,  so that  he  would  be  able  with  their  support  utilise his wealth  of experience  to  work  for  the  good  of the  country to improve  on the  economy. He argued  that  his appointment  is another call  to national  service.

Mr. Sunday  Dare  from Oyo state,  until  his  nomination was  the Executive commissioner, stakeholders management  of the  Nigerian communication  commission  and  convener  of  social media  Clinic, a media  communication  technology  committed to educating  private  citizens on IT development  and  use of Telecom  as information tool.

He was the chief IT staff and special  adviser  media to Tinubu. He improved  health  coverage  with his online  health resources centre in Daily Trust to provide critical data on diverse health  issues. He was at the voice  of America Hausa  service  and  was  also  at the  The  News  and  Tempo  magazines  as  General Editor and  Editor.

He is from  Ogbomosho  in Oyo state and  his  appointment has  come  as  a surprise  to the  people of Oyo state  because  he was  least  expected. The  Oyo  APC Reformers said  that  they  were  happy  that  the  slot  was not  given  to former  Governor  Ajimobi  or any of his  cronies.

Hon. Lawrence  Adewole and  Engineer Dipo  Fawole said God  prospered the  man  with  innovations and that his ministerial  appointment  would be  blessings for  oyo state

Also  Dare  stole  the  show  during  his  screening as the  Senators from Oyo  state applauded  him as a proud  son of the  state. They also believed that he would do the State proud.

Senator Teslim Folarin  who  was  highly  delighted  about  Dare’s appointment  said  he was  sure  he  would  go places  as an innovative  communication  expert.

Meanwhile the Youth  wing  of the  APC and  the Ogbomosho  Youth  forum  have  congratulated  Dare, saying  that  with  his  experience  as  an expert  in IT he would  be  a better replacement  for  Adebayo  Shitu  and that  position  would  prepare  him  for  the  task  ahead, especially the  governorship  of Oyo State.

The  two representatives from Lagos  are Senator Olorunnimbe  Adeleke  Mamora  and  Barrister  Babatunde Raji  Fashola have both  saved  Lagos State in the past as Speaker of the House of Assembly and governor. Fashola served  as  the  minister  of three  ministries in the  first  term  of Buhari and  he was  regarded as a non performer.

Mamora  was a senator  and  has  been a consistent  party  man. His tenure in the senate was quite exciting and active and many were surprised that he was denied another term. He  was in the  campaign team of Buhari in 2015  and  2019 and his  appointment  is seen as a reward  for  consistency which  he got  on his own  merit.

People believe that he would  perform as a man with  lots  of ideas. The governor of Lagos  state Mr. Babajide Sanwoolu and  the  Speaker  of the  state  Hon.  Mudashiru Obasa have    congratulated the two leaders. They  said  that  they  have  no doubt  both  of them  would  do  the  nation proud  just  as former  governor Fashola  did  in his  first  term  with  president  Buhari