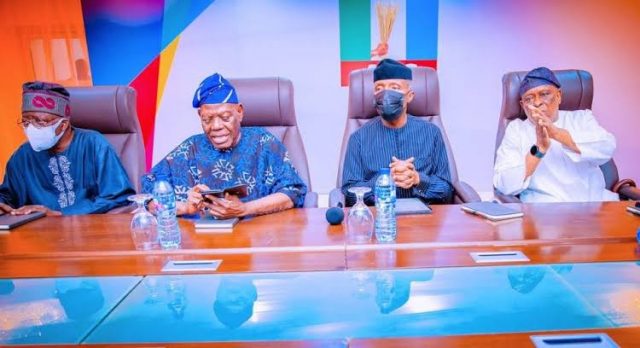 Today June 6 is the big day being awaited, for the All Progressives Congress (APC) presidential primary, which had been postponed severally before it was finally decided for this week following INEC controversial extension of deadline from June 3 to 9, 2022.

The party which is riddled with crises across the states occasioned by the ways delegates elections were held, during wards, local and state congresses, definitely has no choice but to pick who would represent the party in the 2023 presidential race.

Already, the main opposition PDP and other parties have picked their candidates who would slugged it out with whoever the APC picks.

It’s challenge has been compounded by the two recent developments that may threaten the unity of the party after the primary. These include the request and desire of President Buhari to choose his successor, which started hailstorm in the party, and the weekend news of the disqualification of 10 aspirants out of the 23 screened by the Chief John Odigie-Oyegun led screening committee, a decision that has thrown the party into a tailspin, with its national leader, Asiwaju Bola Tinubu, who is one of the contenders for the ticket, lashing at the President Buhari, his vice, Osinbajo, and Gov. Abiodun of Ogun state.

The issue of consensus heightened, after President Buhari met with the governors and some stakeholders of the party, briefing them on his preferred candidate and urged them for their support. The president’s position has since been criticized and has further divided the party, because it was believed that his preferred candidate is a Northerner, speculated to be the Senate President Ahmed Lawan.

Although there were speculations too, that it could be the vice President Yemi Oshinbajo and that Buhari was only using Lawan who has not moved round the entire country to solicit support of the delegates like others, as a cover up for Osinbajo.

Be it as it may, as they all go to the field today, it has been envisaged that the battle may go along two divides of the North and South, since the ticket has been thrown open and no more based on zoning, as it was previously canvassed.

Before now, the south has been advocating and insisting that the ticket of the party should be soley for the zone, since Buhari is from the North. This idea was bought before but the situation changed with the emergence of Lawan. This prompted other Northern aspirants to emerge.

In all, the south has more aspirants out of the 23 that took the nomination form of N100million and even now that 10 of them have been disqualified, after the screening that was conducted by the Chief John Odigie Oyegun’s led panel.

From the activities and display of seriousness by the aspirants, it is glaring to all that only five of them have shown the actual and genuine desire to contest as they have moved round the entire Nigeria to canvass votes from about 7,800 delegates billed for the primary.

The five notable serious aspirants are the leader of the party Tinubu, who is rated as the most serious, determined and resolute about the contender. The Vice President, Yemi Osinbajo is rated next to Tinubu, with the Tranport Minister Rotimi Ameachi, and the governor of Ekiti State, Dr. Kayode Fayemi, who himself acknowledged that only five of them are serious about the contest and the late entrant into the contest, the Senate President Ahmed Lawan.

Lawan is believed to be the game changer and spoiler who the Northern element in the APC wants to use to destabilise the South and as well to face the Peoples Democratic party, which is fielding a Northerner from the North East where Lawan also comes from.

It is believes that if Lawan comes on board for APC it would be a North East contest, which has been clamouring for the presidency for a long time because only the North West has been in power in the North, since the current political dispensation in 1999.

Although it is also being speculated that Northern delegates would determine where the pendulum would swing, there were moves for the South to move together and come with a united block vote, as pundits argued that the south should learn from the mistakes of their counterparts in the opposition party, saying that if the South in the PDP had come together as a block, Atiku could not have defeated Gov. Nyeson Wike from the South.

But Business Hallmark reliably gathered that the leaders of the party, till last night were still persuading both Tinubu and Osinbajo to see reason why one of them should accept the other for the South West to show the North that they are ready and would not take anything than the presidential ticket from the party.

As one of the coordinator of Yemi Osinbajo campaign organisation told Business Hallmark, “even the so called prominent aspirant in the North In person of Lawan is not serious because he has not been seen going round the entire country like the rest, especially, those from the South.

“To us in the Osinbajo camp, we believed that Lawan is being forced into the race by a powerful block to scuttle the chances of Southern candidates, who are well prepared for the presidential race.

“You can see that Lawan has not been seeing engaging in any activities to show his seriousness but rather he must have been banking on something, may be a promise that with or without the primary, the ticket is sure for him.”

The coordinator, however said that the North should be careful this time around as the tension in the country is high as no other section of the country would now wants to play a second fiddle.

In the South West, for instance it is said that the battle would be between Tinubu and Osinbajo if there was no last minute alignment for consensus.

Senator Ali Ndume the Director General Rotimi Ameachi Campaign organisation, believed that the primary would favour his principal because ” he is the only Nigerian aspirant while others are regional”.

In his own submission, the spokes person for the Kayode Fayemi Campaign organisation Mr. Femi Ige, said the seriousness of the aspirants is determined by the ability to move round the country just as Dr. Fayemi has done.

Dr. Kayode Ajulo, a constititional lawyer, who is in the Osinbajo campaign committee, believed too, that his principal is not a regional person but an aspirant who appeals to all Nigerians, is likely to pick the ticket of the APC.

Tinubu in his reaction over the likelihood of a consensus, was said to have told party leaders that the only way he could accept consensus is if he is the one chosen. But left to him, he is a democrat and he would prefer democracy not consensus.

“I vote for democracy one man, one vote. I have the conviction that with democracy in place at the primary, my chances of winning is very very bright. I am confident, I am sure I can, and i will win it.”

Meanwhile, an activist, Muhammed Al-Amin argued that he hates the way people discussed the issue of Nigeria on regional basis.

“To me, I will rather prefer a National leader than a regional leader.This is what I would like the delegates to put into consideration and de-emphasize on region to pick the best candidate for Nigerians.”

As the situation is, none of the aspirants, either from the South or the North, is sure of winning. What is expected is the last minute alignments and realignments on the field, before a winner could emerge.

As this was being written, President Buhari was meeting with all the presidential aspirants, and the south west aspirants were also expected to meet on Sunday for consensus.