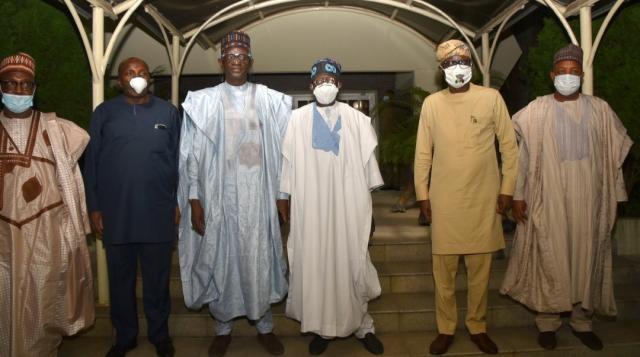 Police and other security operatives have barricaded the surroundings Buhari House, the national secretariat of the ruling All Progressives Congress (APC), as tension mounts over the rumoured sack of the chairman of the party’s Caretaker Extraordinary Convention Planning Committee (CECPC), Mai Mala Buni.

As early as 8am on Monday, policemen had taken strategic positions in and around the secretariat, restricting human and vehicular movements, in what they said was part of efforts to maintain law and order.

In the meantime, Buni, governor of Yobe state who has chaired the committee since 2020 when the Adams Oshiomhole led NWC was dissolved, had maintained that he is still in charge of the party despite reports that he’s been sacked by President Muhammadu who is patently in London.

The governor stated this position in a statement issued Monday morning in Abuja and signed by the National Secretary of the CECPC, Senator John James Akpanudoedehe.

The statement reads; “Our attention has been drawn to sponsored media reports on an imaginary leadership change in the All Progressives Congress APC Caretaker/Extraordinary Convention Planning Committee CECPC.

“The media report is fake news and should be disregarded.

“The APC is a progressive political party guided by rules. Leadership changes are not announced by ‘sources’ through name dropping in the media.

“We urge our teeming supporters, members and indeed the general public to remain calm and support the Governor Mai Mala Buni-led APC CECPC conduct a rancour-free and credible National Convention deserving of our great party”.

There were reports Monday morning that President Buhari may have sanctioned the sack of Gov. Buni on Sunday night before departing the country for London