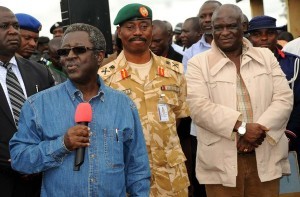 The traditional ruler of Kumbun village of Wase local government area of Plateau State, Ponzhi Jessey Miri, yesterday alleged that over 40 persons from three Tarok communities of Kadarko, Kurmi and Wadata in the local government were killed when persons suspected to be soldiers invaded the communities.

Speaking to our correspondent on phone yesterday, the traditional ruler said, “We are still in shock over what the military did to our people; as I speak to you, the corpses of our people killed still litter the communities; thousands of homes were burnt and some of our people were burnt in their homes including children and the aged”.

Comrade Jangle Lohbut, chairman of a Tarok group, Ngwan Ishi Otarok, NIO Wase chapter, said soldiers stormed some villages in Wase LGA of Plateau State, noting that all the villages belonging to Tarok and other tribes were razed to the ground while many lives were lost.

He said, “Many properties worth millions of naira were lost; many people without shelter are sleeping under trees and without food.”

He added that there was looting going on Saturday night by unknown people, alleging that the army killed two policemen, one civil defence corps officer and one vigilante member.