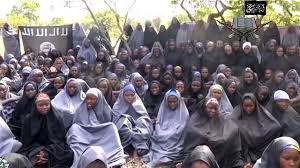 Anxiety has built up around the whereabout of the Chibok girls, days after troops invaded parts of the infamous Sambisa Forest without finding them.

Other camps destroyed by the troop he added, include Wulari Bukar, Gangala, Anguwar Bakwai, Jigide, Kotorima, Lagura Bello, Lagina Fulani, among others, expressing optimism that with the dislodgment of the group, the military is confident of rescuing more hostages held by the displaced Boko Haram members.

Olukolade who briefed the press on Thursday in Abuja, said “the well coordinated operation is already yielding results as troops in the last few days rescued 200 girls and 93, women and an additional number of hostages.”

The true identity of the rescued girls and women, he noted, is yet to be ascertained, adding that “at the moment, what is upper most and of priority is their movement to a conducive place where they are now undergoing thorough profiling to verify their true identity, where they come from, how they found themselves in the forest”.

He assured of the troops determination to pursue and track down members of the Boko Haram sect now on the run.

“Already, the dislodged and disorganised terrorists are in flight on different directions and running helter-skelter in the expansive forest. There is no longer any respite or sanctuary for them; they will be pursued and tracked down”.

Okulolade’s statement corroborated the earlier one by Acting Director, Army Public Relations, Colonel Sani Usman, who also said two major combat tanks and high calibre ammunition used by the terrorists were recovered while many others were destroyed.

“The troops have also rescued additional women and children. They have been evacuated to a safety zone for further processing.

Olukolade said though the Nigerian troops also lost one soldier and 10 were wounded in the combatant fight, the military is committed in making the forest free of terrorist invasion.

He re- assured civilians living in the area of adequate protection as operations was not targeted at civilian populations but aimed at dislodging members of Boko Haram from the forest.

But President of the Women Arise for Change Initiative, Dr Joe Okei-Odumakin, had on Wednesday, expressed anxiety that the Chibok girls, hitherto widely believed to be in Sambisa Forest, was yet to be found.

She urged the military to take stock of the people they had rescued while charging Nigerians to brace up to assist the military and be more vigilant.

“This is the time for the people whose loved ones are still missing to say so and provide information to the security agencies,” she said.