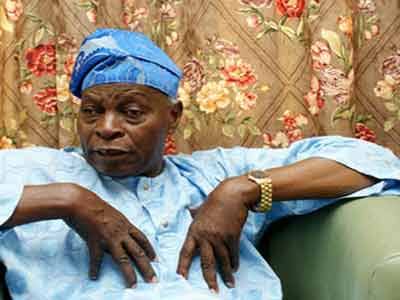 A former Secretary to the Government of the Federation and the Deputy National Leader of the pan-Yoruba socio-political organisation, Afenifere, Chief Olu Falae, has distanced himself from the group’s endorsement of the Labour Party’s presidential candidate, Peter Obi.

Falae’s position is coming a day after the Afenifere leader, Chief Ayo Adebanjo, announced the pan-Yoruba group’s support for Obi.

Adebanjo had explained that Afenifere was backing Obi for reasons of equity and inclusiveness.

He said the other geopolitical zones had produced leaders of the country, saying it was only fair that the next president should emerge from the South East.

“We cannot continue to demand that the Igbo people remain in Nigeria, while we at the same time continue to brutally marginalize and exclude them from the power dynamic,” Adebanjo had stated.

But Falae disagreed with the endorsement, saying that he was never informed of the Afenifere’s stance on Obi and his Labour Party ahead of the 2023 presidential election.

He also said it was still too early to endorse a candidate without going through the programmes he had for the masses.

“The elder statesman said he has to consider all important parameters, including capacity, experience and proven track record before endorsing a candidate,” Falae said in a statement signed by his Personal Assistant, Captain Moshood (retd).

Though, Falae admitted that the South East had not had the opportunity of being Nigeria’s president, he maintained that it’s not an automatic slot that can be filled without other important considerations.

“As a responsible leader, Chief Falae will consider all important parameters, including capacity, experience and proven track record before endorsing a candidate.

“This correction is necessary in order not to mislead the public that Chief Falae is supporting any of the candidates yet.

“It is necessary to await the programmes and manifestos of the political parties and their candidates before arriving at a particular candidate to support.”

Falae agreed that although the South East region had not had the opportunity of being Nigeria’s president, it was for them to persuade other Nigerians that they could offer something better than candidates from other geopolitical zones.

”It’s not an automatic slot that can be filled without other important considerations. Chief Falae never canvassed or claimed to be supporting Mr Peter Obi of the Labour Party for the 2023 race,” the statement added.