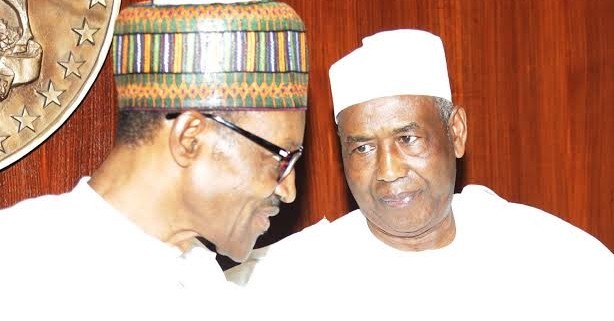 Nigeria’s president, Muhammadu Buhari has said the passing of long time friend and political associate, Malam Isma’ila Isa Funtua has created a huge gap, as he has consistently stood by him.

Funtua passed away on Monday night at 78 after a brief illness suspected to be cardiac arrest. He was said to have suddenly fell ill after going to the mosque for prayers and decided to visit his doctor where he eventually died.

A second republic minister, Funtua was believed to be one of the power brokers or the cabal of Buhari’s government, along with the late former Chief of Staff to the president, Abba Kyari; the President’s nephew, Mamman Daura; as well as former secretary to government, Babagana Kingibe.

He hailed from Katsina State, the same state as President Buhari.

The president in as statement by his senior special adviser on media and publicity, Malam Garba Shehu said he received the news of his passing with sadness.

“President Muhammadu Buhari received with deep sadness on Monday evening information on the passing of his long-time friend and associate, Malam Isma’ila Isa Funtua, who was Life Patron of International Press Institute and Newspapers Proprietors Association of Nigeria,” the statement read.

“The President condoles with family members, government and people of Katsina State, and all associates of the former President of NPAN, especially the media industry, on the loss, describing him as ‘greatly admired and respected.’

“President Buhari believes the demise of the publisher and businessman has created a huge gap as Malam Funtua consistently stood by him in his political journey.

“The President prayed to Allah for the repose of Malam Funtua’s soul, and to grant the family strength and fortitude to bear the loss.”

Funtua was born in Funtua, Katsina in January 1942 and received received Islamic education, where he learnt the Qur’an, Islamic jurisprudence and the traditions of the Prophet Muhammad. He later attended the Commercial College in Zaria, Federal Training Centre in Kaduna and the Ahmadu Bello University in Zaria. He also attended the University of Manchester and was the Monitor-General of Course 9 of the Senior Executive Course at the National Institute of Policy and Strategic Studies.

He started his career in the Katsina Native Authority where he eventually rose through the ranks working in the defunct North Central State. He subsequently joined United Textiles Limited in Kaduna, where he was the personnel manager.

Funtua later joined politics and was appointed a Federal Minister in the Second Republic. After government service, he went into business, founding Funtua Textiles Limited, Bulet International Construction Company which he chaired until his death, among other businesses. He was also managing director of the Democrat Newspaper.

In business, he cultivated clients, business associates and friends who extended his interests beyond the normal scope of business and was a man of means.