Home Politics ‘You are not on my level’ – Wike, Umahi in war of...
Facebook
Twitter
WhatsApp
Linkedin
Email
Print 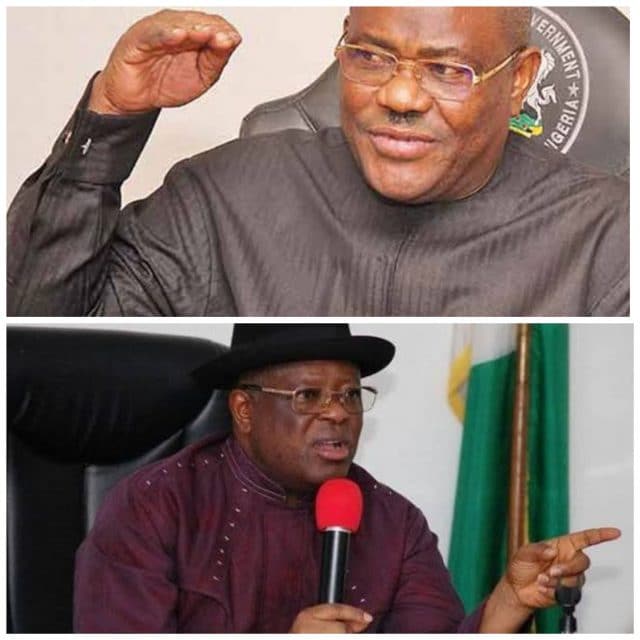 Rivers State governor, Nyesom Wike and his Ebonyi State counterpart, David Umahi, are currently locked a bitter war of words over the latter’s claim that he defected from the People’s Democratic Party (PDP) to the All Progressive Congress (APC) because the PDP has been unfair to the South East Geopolitical Zone.

Umahi had at press conference in Abakaliki, capital of Ebonyi, on Tuesday, confirmed that he has joined the ruling party, citing “injustice” done to the South East PDP, wondering why the PDP has not zoned the presidency to the region. But his claim did not sit well with Wike who argued in response that the Ebonyi governor was being unfair to the opposition party, and that his quest to be president is reason for his defection to the APC.

Wike argued that ordinarily, he would not have been perturbed by Umahi’s decision to defect to the APC, but, he felt offended by his attempt to justify his decision on the purported injustice meted out to the South East by the PDP. He then demanded that the Ebonyi governor retract the statement that the PDP has not been fair to the South East, noting that under the PDP, the South East has produced Senate Presidents; National Vice Chairman of the PDP and Secretary to the Federal Government.

“My friend, Umahi wants to be president. There is no problem about that. You have a right to be president. Nobody can stop you. You are educated. You have been a governor for two terms, so you are qualified to say I want to be president of Nigeria, Wike had said in a statement on Tuesday. “But, that does not mean, that because you want to blackmail your party, and tell lies to the people you are leaving the party because of the injustice meted against the South-East, that is not correct.

“In life , power is sweet, but conscience is important. It is most offensive and insulting for a man to lie against his party because of power. My reaction to Governor Umahi’s defection is not that he has no right to defect, but to say he is defecting because of injustice meted to the South East that is insulting to the South East.”

Umahi in response, criticised Wike, describing him as a dictator. The Ebonyi governor in an interview with Arise TV on Wednesday, alleged that Wike is single-handedly controlling the affairs of the PDP, which according to him, has made governors on the platform unhappy with him.

He went on to say that Wike single-handedly made Prince Uche Secondus the PDP Chairman and tried to impose one of his own as the minority leader in the House of Representatives.

Umahi also alleged that when he went to Bayelsa State to organise PDP governorship primary, Wike wanted him to work against a fellow sitting governor, but he refused and Wike became unhappy.

“Wike has called the PDP committee all kinds of unprintable names, and I have asked Wike, he is my friend, and let’s not take on ourselves because it will be very dangerous. Focus on the party, the party does not belong to him and this is nothing personal but Wike is demonstrating the dictatorship tendencies in him by taking on me a fellow governor.”

However, Wike again, hit back at the Ebonyi governor. In an interview with Arise TV later on Wednesday, Wike said that Umahi cannot threaten him, adding that he (Umahi) knows him too well, adding that he is not at same level with his Ebonyi counterpart.

“I am not at the same level with Governor Umahi, he said I single-handedly imposed Secondus, that’s an indictment of him. Secondus is from my state. I went to Umahi to seek his support for him and he agreed, I also went to other governors. Is Umahi now saying that I forced him to support Secondus?

“All of us know that Umahi has been fraternising with the APC. I heard they had an agreement that he will give them 25 percent in his state.

But Umahi cannot threaten me, he knows me too well. When the case of Edo State came up I stood firm and said we cannot go this way, if we go this way we will destroy our party and are bound to lose elections,” Wike said.

“It therefore, requires everybody to sit together to agree, and when all of us agreed, we saw the success and that affected us in Ondo state because we could not agree. If you saw the way Umahi spoke earlier, you’d know he is a man that things aren’t good with him now.

“Umahi has the right to move to the APC, it’s his constitutional right, but we cannot in all cases allow Umahi blackmail PDP that made him chairman of the party, deputy governor, and governor and then you now realize there is an injustice against the south East. All of us in PDP know the romance of Governor Umahi with the APC. We had a meeting and he came out to say he had an agreement with the president that he’d give the president 35 to 40 percent as the case may be.”

The Rivers governor during another appearance on Channels TV, went on to challenge Umahi to a debate, noting that he has nothing against his presidential ambition.

Wike expressed displeasure with Ebonyi governor’s actions in lead up to his dumping the PDP and his claims that injustice reigns in the party. The governor, said, however, that he understood Umahi’s comment to mean he has been working with the APC all along.

“If he has not been working with the APC, how will he know there is more room for consultation in APC than in PDP? Wike wondered.

“The point remains that Umahi knows and I challenge him to a debate and I will tell him I am not saying that he shouldn’t be a president. Nobody is God to say who will be President and who will not be President. It is God.

“Now you are a second-term governor, you are realizing there is injustice for the presidency.

“Has PDP come out to say we are zoning Presidency to A or B for you now to say, ‘Yes, having done this against my people I will go here because these people have zoned it to us.’

“Since they have zoned it to us, I will move to that place (party) because I am a man that wants to fight for my people. So, on what basis can you now say there is injustice