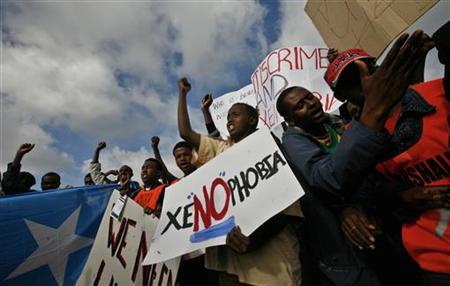 The Permanent Secretary, Ministry of Foreign Affairs, Ambassador Danjuma Sheni, has been suspended for his alleged role in the controversy that trailed the invitation of Nigeria’s envoys from South Africa to Nigeria.

Media reports at the weekend had claimed that Nigeria has recalled its envoys from South Africa over the xenophobic attacks in the country.

The South African government has already reacted to the report, describing it as unnecessary.

The Special Adviser to the President on Media and Publicity, Dr. Reuben Abati, had on Monday maintained that there was no truth in the report.

Claiming that there was a mix up and misinformation on the matter, he said that Nigeria’s Charge D’Affairs to South Africa was invited for consultation.

A reliable source, who spoke with State House correspondents on condition of anonymity, said that a query has already been issued to Sheni by the Head of Service of the Federation, Danladi Kifasi, on the order of President Goodluck Jonathan.

The source said that Sheni’s offence was that he did not get clearance from the President before inviting the country’s Charge D’Affairs in South Africa for consultation.

The President, he said, was miffed that the ministry embarrassed him again, few weeks after a diplomatic row between Nigeria and Morocco over whether he indeed spoke with King Mohammed VI as claimed by the ministry.

He said Sheni would have been dismissed if not for the civil service rule.

“The permanent secretary in the Ministry of Foreign Affairs has been suspended and queried for embarrassing the President by not clearing from him before inviting the Charge D’Affairs.”

“The President on Monday directed the Head of Service to query him and he has 24hours to respond to the query.

“You will recall that that was the second embarrassment, this one coming shortly after the Morocco saga.”