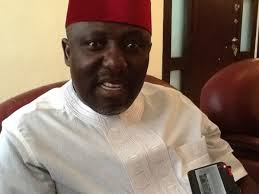 Governor Rochas Okorocha of Imo State has said he is not afraid to defend his victory at the Election Petitions Tribunal, where the governorship candidate of the Peoples Democratic Party (PDP), Emeka Ihedioha, has vowed to challenge his declaration as the winner of the governorship poll in the state.

This was contained in a statement by the governor’s Senior Special Assistant on Media, Sam Onwuemeodo, and made available to newsmen in Owerri, yesterday.

Okorocha, who is the candidate of the All Progressives Congress in the governorship election,  according to the statement, wondered why Ihedioha did not complain of irregularities before the rerun.

He argued that Ihedioha’s insistence to file his petition at the election tribunal would “expose the true figures” of the areas he(petitioner) won.

The governor added, “First and foremost, let us encourage Ihedioha to go to the tribunal and we shall meet him there.

“He shall make his claims and we shall make our counter-claims, and Nigerians will then know how he got more than 55,000 votes in his Aboh Mbaise Local Government Area and how he got two-third of his overall votes from the three local governments in his Mbaise area.”