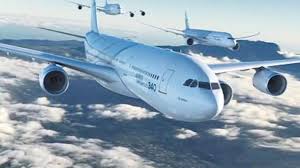 Am sure my headline would have been seen to be remotely possible a few months ago, however of recent it has happened in Nigeria twice in one month.

The most recent which happened a few days ago according to eye witnesses was even quite scary, it happened at about midday.

According to an eyewitness at the airport one of the planes was taxing from the runway to MMA 2 to disengage passengers while the other aircraft was preparing to take off to port Harcourt from the same terminal.

Both planes were  partially damaged after the incident and Nigerian civil aviation authority immediately grounded both aircrafts while visibly shaken passengers were asked to disembark from the planes. Refunds of tickets were made to passengers and according to NCCA nobody was hurt. Information that the incident has been referred to the accident investigation bureau for further investigation( just like the Emirate versus Hak airline)  is the latest news concerning the incident.

Hopefully this will make airlines employ qualified personnel who are paid  well so that they will perform satisfactorily in sensitive positions. What ever name those who control air traffic on land are called (l was told they are marshal another person called them Land signal officers) isn’t as important as to them doing their job right.

The partial damage in both cases could have resulted in a major aviation tragedy if one or both of such aircrafts had caught fire due to the impact. From the reports concerning the recent collision it was obvious that the pilot of the just landed aircraft was misdirected.

Why would a landing signal officer misdirect the pilot? Or is it that the landing signal officer isn’t a qualified personnel and that his mistake wasn’t intentional or that he is actually qualified but has a score  to  settle. Whether   it was intentional or not is not the issue here. The issue is the tragedy of lost lives that would have occurred if things had gone just a little bit more wrong. 250 lives were at stake, brilliant and successful Nigerians going about their most probable lawful businesses were endangered. This was due to the negligence of a few people. Nigeria is losing lives on a daily basis to boko haram if nothing immediate can be done to stop that we should be seen to make sure no more lives are taken unnecessarily. The only mobile transportation that can be allowed to scratch  and bump in to one another are those on roads. Even when such happens noise is made, law enforcement agents are called in to pin point the guilty and the innocent. Business cards are exchanged and repairs are made. After the investigation which we hope won’t take too long is conducted where ever the negligence came from must be pin pointed and dealt with accordingly. If the 6th of July incident had been looked in to a dealt with just a few days after it happened maybe the incident of 17th would have made the signal officers more diligent as to avoid the recent occurrence. So if the investigation of this recent one isn’t concluded as soon as possible maybe another will occur and it might end up being more than partial damage. Its about time for Nigerians to learn to appreciate the jobs they do that puts food on their tables well enough to do it diligently.

Whether they are called Marshall or landing signal officer is not important. What is important is for them to do their job right, which is   to facilitate the safe taxi and parking of aircrafts.