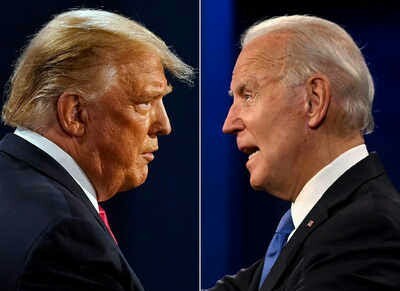 By early Wednesday in the United States, the race between Trump and Biden had narrowed with Biden holding a 238-213 edge in the Electoral College and Trump continued to hold a lead in Pennsylvania, which was considered one of the keys to winning, according to Detroit Free Press.

If accurate, the 4.99 million votes were still believed to be hundreds of thousands short of the total cast in the historic election, meaning it was possible Biden could add to that that total, with big numbers of ballots remained to be counted in Michigan’s largest counties, including Wayne, Oakland, Macomb and Kent as of Wednesday morning.

“Hundreds of thousands of ballots in our largest jurisdictions are still being counted, including Detroit, Grand Rapids, Flint, Warren & Sterling Heights,” Secretary of State Jocelyn Benson said in a post on Twitter about 7 a.m.

If all the current trends in states nationally were to hold, Michigan could be the tipping point state to give Biden the 270 Electoral College votes he needs to win the election, but that remained in doubt with so much counting yet to be done.

More than 3.2 million votes were cast by absentee ballot in Michigan. Those were the votes that were still largely to be counted and they were expected, according to polling and other modeling done by the candidates, to swing sharply toward Biden, the former vice president. Elections officials expected overall turnout to top 5.26 million, well over the record of about 5 million in the 2008 election.

A similar situation was occurring in Pennsylvania, where Trump led 56%-43% but with only 64% of the vote counted. Together, the two states account for 36 Electoral College votes, which could ultimately decide which of the candidates gets to the 270 needed to clinch the White House.

In Wisconsin, another state Trump flipped in shattering the Democratic “blue wall” in the Upper Midwest in 2016, Biden had a slim-but-growing 20,748-vote lead — equal to about seven-tenths of 1% — with 95% of the vote counted. Four years ago, Trump won Michigan, Wisconsin and Pennsylvania each by less than 1% of the vote, shattering what had been the Democrats’ vaunted “blue wall” in the Rust Belt.

Early Wednesday, Trump falsely claimed he had won the election, with millions of votes to be counted, saying there weren’t enough votes left to be counted in Pennsylvania to swing the outcome, even though that is untrue. Casting doubt again on the validity of mail-in ballots, he said he would be “going to the U.S. Supreme Court” to take steps to stop the count, even though every presidential election sees counting of absentee balloting go on for days at times.

“This is a fraud on the American public. This is an embarrassment to our country. We were getting ready to win this election. Frankly, we did win this election,” Trump said, despite clear evidence that not all the votes had been counted and millions left uncounted as of early Wednesday could swing the result.

Biden, who somewhat earlier had said the results looked good and urged his supporters to have patience as the absentee ballots were counted in the coming hours and days, called Trump’s statement “outrageous, unprecedented and incorrect.”

Having confirmed new Supreme Court Justice Amy Coney Barrett just recently, Trump enjoys a 6-3 conservative majority on the court. Whether the election ends up before the justices or not, however, it was clear that Trump had done better than predicted by polls, holding on to Florida, Texas, Ohio and Iowa, states where he was said to be in trouble.

Polls also showed Biden with a strong edge in Michigan and Wisconsin and a somewhat smaller one in Pennsylvania, which, in the tally so far at least, hasn’t emerged.

Handicappers had said that Trump was expected to lose based on national and battleground state polling — FiveThirtyEight.com, a statistical analysis site, said Trump had only a 10-in-100 chance of beating Biden — but it was clear that Trump’s Election Day turnout as well as the uncounted absentee ballots had made the race impossible to call.

But Biden did appear to have flipped Arizona, a key state that backed Trump in 2016, giving him 11 electoral votes that could held determine the outcome. With 84% of the expected vote in, the Associated Press projected Biden the winner, 51%-48%.