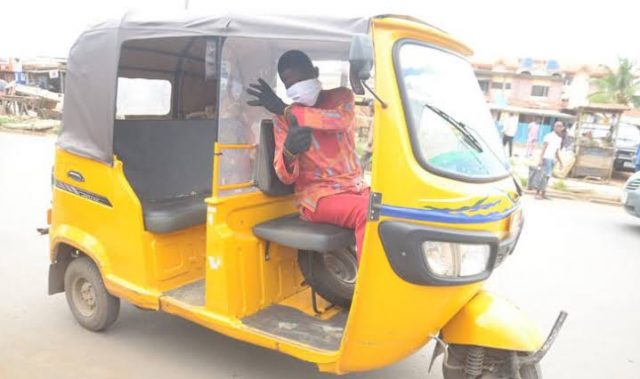 There were protests by tricycle operators Tuesday morning at Ile Epo, Abule Ẹgba, Ekoro and Àgbàdo parts of Lagos over what they called multiple ticketing by boys loyal to Alhaji Musiliu Akinsanya, alias MC Oluomo.

This they said, said have made them unable to make daily payments to owners of their tricycles.

Speaking with this medium, the protesting tricycle operators decried what they called regime of double taxation in the hands of thugs allegedly brought from Oshodi by Akinsanya to double ticket them.

This development, according to them came about when Alhaji Akinsanya took over the parks in the areas mentioned early last week.

John Atteh, a tricycle operator told Business Hallmark that “it has been very difficult for me and my family since the takeover of our park, unlike before when Alhaji Abiola Istijabah, the chairman of Tricycles Owners and Operators Association of Nigeria, Lagos chapter was fully in control.

“Then it used to be one ticketing. Now I don’t know what to do as the owner of the tricycle is threatening to take it back from me.”

Atteh’s story is not different from Hakeem Agbegbe, another operator who said “yesterday I could not make any money delivery to the owner of my tricycle, and today i don’t know what will happen.”

He said they had no option but to protest the unpalatable conditions they have found themselves.

One of the leaders of the protests, Waheed Adeoti appealed to the governor of Lagos State, Babajide Sanwo-Olu to come to their aid, saying if the situation persists operators may be forced out of business, a situation that may worsen the transportation problem in the state.

Many of the operators who spoke with this medium urged the Lagos State government to settle the rift between Istijabah and Akinsanya, they added that Alhaji Akinsanya is not a tricycle operator and wondered why he should be meddling in the tricycles operations in the state.

“I honestly pray that the governor will look into our challenge for the sake of our family. The only way to go for peace to reign is to allow Tricycles Owners and Operators Association of Nigeria under its leaders to manage its operations as was the case before”, Adeoti said.

As at the time of filing in this report, protests were ongoing in Ile Epo, Abule Ẹgba and Ekoro.

It was learnt that under Alhaji Abiola Istijabah, there was nothing like multiple ticketing.

“In the old order, many a time we would approach Alhaji Istijabah for help concerning our children school fees, and he would gladly do so. But now we have nowhere to go, since they are wrestling control from him. It is sad,” Adeoti said.