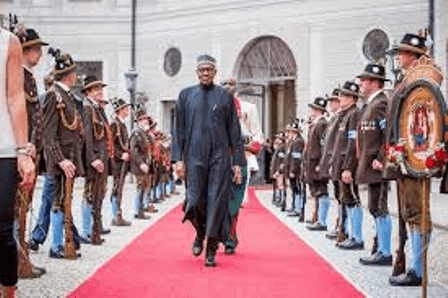 Issues of security top President Muhammadu Buhari discussion at the G7 as he presented a 9-point demand to the informal bloc of industrialized countries of the world today.

The Senior Special Assistant to the President on Media and Publicity, Mallam Garba Shehu, in a statement from Germany, said President Buhari was armed with the “wish list” of Nigeria in line with the demand of the Group of Seven (G7) industrialized countries.

The group had requested the then president-elect to prepare a shopping list and come with it for its consideration as parts of its goodwill towards the new leader and the country.

Malam Garba Shehu quoted the president as saying that “we have a problem which they know.”

He quoted the President as saying that he had used every opportunity at his disposal ahead of this meeting to discuss the country’s needs with specific reference to terrorism and development needs at person-to-person meetings and phone conversations with some of the G7 leaders.

According to the statement,  the president will also need the support of the industrialized nations in the area of economy, infrastructure, power and energy, and corruption. Other areas the president is asking for G7 meeting’s assistance include increased Foreign Direct Investment (FDI), enhanced transparency in elections, environment and good governance.

“He is also expected to meet President Barack Obama, President Francois Hollande of France, Prime Minister David Cameron of Britain, and other G-7 leaders in the course of the Outreach Session and a working lunch at the Elmau Castle,” the statement added.