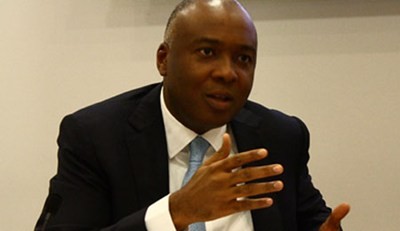 Former Kwara State Governor, Senator Bukola Saraki, monday described the payment of oil subsidy to marketers by the federal government as a huge racket created by government officials with the intention to loot the treasury.

Saraki, who made this allegation while fielding questions from journalists in Abuja on his aspiration for senate president’s office, advised the federal government to deregulate the downstream oil sector with a view to salvaging the corruption-ridden sector.

He also said he had the capacity, competence and the will power to lead the eighth Senate as he advised his colleagues in the All Progressives Congress (APC) to make competence, capacity and merit their watchword as they prepare to elect the next president of the Senate and other principal officers as against sentiments.

On the alleged racket, Saraki accused the government of President Goodluck Jonathan of legalising fraud in the oil sector through the issuance of import licences to as many as 82 companies many of which he said lacked the required facilities to do the business.
According to him, a whopping $2 billion is spent as subsidy every year on products which he said were not largely supplied.

He added: “Look at the area of fuel issues today, you can see that oil marketers have obligations that they think the government will not meet and government cannot meet them and then, you have the kind of crises we have today. You have states and federal government agencies that cannot pay salaries not to talk of ongoing capital projects that cannot be completed . These are major issues and I think that the National Assembly has to begin to address those three areas such as oversight functions, passing of laws or the accountability of our people.

“We must connect for Nigerians to see the reasons we were elected to represent them and I think that does not exist as of now. That is what is going to be the point of departure. It is key for people like myself to see that we begin to play that role for Nigerians to understand the reason we have National Assembly.

“On the policy direction, I do not want to sound like ‘we said so’ but that is what leadership is all about. We should find leaders that have vision and can work not because of what they stand to gain but can stand up and say what is right. It is good for all of us to talk about change or about interest that we have, it is beginning to look at trying times when people had to choose between comfort and standing for what was right.

“Part of leadership is having principle and commitment to be able to stand for the things that are right despite discomfort. If you look at my comments, my views have been that the issue that has crippled the nation is the inability to manage our revenue effectively. Other countries that are producing oil are not going through what we are going through because when oil was $100 per barrel, they used the money effectively because it was clear a day like this was going to come.

“No matter what is happening now, if you go back to look at it, the major issue that dwindled us was the subsidy management. We are talking about a minimum of over $32billion paid for over five to six years. That is the difference between where we are now and that time. It has impacted on our exchange rate; it is going to impact on our infrastructure; there is no money for capital budget. It is impacting on the crises we have today. When you have surplus money, people do not feel the impact.”

Culled from the net