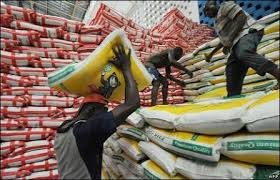 A major indigenous rice producer has cried foul over what he described as a selective granting of waivers to some of his colleagues by the Minister of Agriculture and Water Resources, Dr AkinwunmiAdesina.

It was gathered that some major rice importers, who allegedly exceeded their quotas for importation and asked by Customs by the Nigeria Customs Service to pay their duties in ecess of N2billion, ran to the Ministry of Finance to obtain waivers in order to pay less duties.

However, it was learnt that they were refused the waivers but headed to the Ministry of Agricultures where only one of them was granted.

It was this selective decision by the Ministry that has now caused ripples among the other importers who felt aggrieved by the development.

One of the aggrieved importer who could not understand why he was denied, specifically noted, that while others got, he was denied, even though he was qualified, as much as every other person.

“We may not be the largest player in the rice value chain, but we are nonetheless, a significant integral player in the rice supply chain, with heavy investments in hectares of rice farmland and enviable rice milling capacity”, he indicated, stressing that they have a facility that is fully integrated with farm, mill and parboiling capacity; noting that his company has all the qualifying factors in its support, but was yet, denied.

“But, is it fair? We have all the qualifying requirements; same as those who were granted waivers, but we were still denied”, he indicated, explaining that he had always believed that they were all operating on same level playing ground.

“We granted a concession. But it was on the basis of merit that the Minister, Dr.AkinwumiAdesina granted it”, he explained, adding that it was based on observable facts.

“We have granted a waiver, but I must assure you that of the firm in question, its existing rice production and processing operations and future investment plans had been assessed, against the certain criteria and that was why the waiver was granted”, he indicated further, adding that the Ministry actually waived some percentage of an import quota of 246,000 MT, because of its being a major rice investor for the period, under review.

However, WaleAdeniyi, the National Public Relations Officer of Customs disclosed that the position of agency in respect of duty collection had not changed, stressing that management would collect the duty on the excess importation and would sanction any importer who wishes to circumvent the move.

“It is revenue that is due from any excess importation and we have President Jonathan’s backing to make this recovery. So, despite their foot dragging, they cannot escape paying it”, Wale adeniyi stated further.

Asked what the Customs Service would do, should the rice importers remain adamant, the image maker warned against it, stressing that the service has enough muzzle to recover duty that is due to it.

“Some of these importers still import.

They are corporate bodies. So they have indemnities which we can tap into. We have our cards and we can very much play it effectively.

A port analyst, Bernard Okafor has however urged the Ministers not to grant such questionable waivers at this twilight reign of the outgoing President, pointing out that maritime operators might misinterpret it to mean “an arrangee platform” meant to collect a parting gift for the boys”.

He also questioned the wisdom behind granting heavy waivers to local rice growers, maintaining that it was foolish of anyone to grant waivers to rice importers, in a bid to boost local production. He therefore called on Mr President to call his Ministers to order, counselling that his statesman profile should not be soiled.