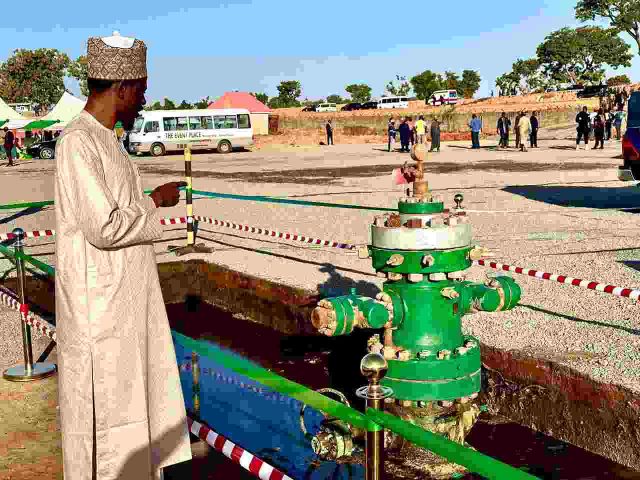 The search for oil in the northern part of the country has been on for decades, but gradually the fresh search for oil has begun to yield result first with the discovery of oil in Kogi State.

Last week, President Muhammadu Buhari officially flagged off the ground-breaking ceremony of the Kolmani OPLs 809 and 810 at the Kolmani field site in Bauchi and Gombe states.

The NNPC Ltd had in October 2019 disclosed the discovery of crude oil, gas and condensate in the Kolmani River region at the borderlands community between Bauchi and Gombe states.

This oil field, according to report will be developed by Sterling Global Oil, New Nigeria Development Company and NNPC Limited.

The flag-off of the crude oil drilling is a  success for the Buhari administration, which has been working  to ensure that the region produces crude oil in commercial quantity.

Findings revealed that it is a major geological structure underlying a large part of Nigeria, extending about 1,000 km northeast from the Bight of Benin to Lake Chad. It is part of the broader Central African Rift System.

The New Nigeria Development Company participated in the Nigerian License Round of August 2005 and won four blocks, including OPLs 809 and 810.

These acreages were first awarded by the Nigerian government under Production Sharing Contracts (PSC) in 1993, to SNEPCo, Chevron and ELF.

These companies drilled a well each in their respective blocs. Kolmani River-1 was drilled on OPL 809 by SNEPCo, Nasara-1 on OPL 810 by CHEVRON and Kuzari- 1 on OPL 813 by ELF. Both reported no commercial finds and abandoned the field.

It was learnt that as part of the current administration’s drive to explore hydrocarbon from the frontier areas, in 2019, the NNPC through its subsidiary, the Frontier Exploration Services (FES) obtained approval of the president and the contractor, the New Nigeria Development Company (NNDC) to drill Kolmani River-2 exploration well.

Findings revealed that this was followed by another exploration Well, Kolmani-River 3, and Kolmani River-4 as an appraisal to Kolmani River 3.

The explorations led to the successful discovery of two fields in the area with discovered 2P reserve of over one billion barrels of oil and 500bcf of gas in place.

In May 2021, the NNPC Tender Board considered and approved a Three-Tier Open Competitive Bidding Process for selecting a Strategic Partner (Financial and Technical Service Provider) for Integrated Development of Oil Prospecting Licences (OPLs) 809/810.

An integrated development approach through the establishment of in-situ hydrocarbon monetisation facilities (a refinery and power plant) was assessed as the best monetisation option for the crude oil and gas to be produced from the blocks.

This was due to the peculiar challenge of the landlocked nature of the assets (over 700km from the shore) and numerous problems associated with evacuation by pipeline required for alternative monetisation options.

Upon conclusion of the three-tier and all related extant due processes, findings revealed that Messrs Sterling Oil Exploration Energy Production Company (SEEPCO) and Africa Oilfield Movers Limited (AOML) emerged as the Financial and Technical Service partner for the integrated development of OPLs 809 and 810 assets.

Being an integrated project, it entails upstream oil and gas production in-situ oil refinery with a minimum of 40,000bopd that could rise up to 120,000bpd processing capacity, a gas processing plant with a feed capacity of 150mmscf/day, a power generation plant of 150MW, and fertiliser plant with capacity of 2,500 tonne/day.

These will ultimately emplace a downstream oil terminal/depot with the capacity to take up to 250 trucks of products/day.

The last  Tuesday, flagging-off of  the commercial production of crude oil and gas from the $3bn Kolmani Integrated Development Project is a major achievement of the Buhari administration in oil and gas apart from PIA.

Last week also NNPC also disclosed that it had discovered  several drillable prospects in the area, as it noted that it was also making an oil exploration re-entry into the Chad Basin.

In his address at the event, President Buhari said the Kolmani River field attracted $3bn worth of investments despite the lack of appetite in the oil sector in recent times.

He said, “Considering the landlocked location and the huge capital requirement, the economics of the project is a challenging proposition.

“Consequently, from the onset, I instructed NNPC Limited to utilise and leverage their vast asset portfolio across all corridors of its operations to de-risk the project to attract the much-needed investment. I have directed NNPC to continue along these lines.

“It is, therefore, to the credit of this administration that at a time when there is near zero appetite for investment in fossil energy, coupled with the location challenges, we are able to attract investment of over $3bn to this project.”

Buhari described the ceremony as important in the economic history of Nigeria, “as we move closer to production of oil and gas in the Upper Benue Trough, specifically, the Kolmani River oil and gas field, straddling Bauchi and Gombe states.”

He added, “This is indeed significant considering that efforts to find commercial oil and gas outside the established Niger Delta Basin were attempted for many years without the desired outcomes.

He said the discovery had emanated from the Federal Government’s charge to the NNPC to re-strategise and expand its oil and gas exploration footprints to the frontier basins of Anambra, Dahomey, Sokoto, Benue trough, Chad and Bida Basins.

He said similar activities across the other basins were currently actively ongoing.

“We are pleased with the current discovery of over one billion barrels of oil reserves and 500 billion cubic feet of gas within the Kolmani area and the huge potentials for more deposits as we intensify exploration efforts,” the President stated.

“I urge the NNPC Ltd, NNDC (New Nigeria Development Company), and their strategic partners to ensure all lessons learnt from our years of experience as an oil-producing nation are utilised to ensure harmonious relationship with the local communities,” Buhari stated.

This came as the northern governors called on the Nigeria Upstream Petroleum Regulatory Commission to ensure the quick conversion of the Oil Prospecting Licence of the Kolmani field to an Oil Mining Licence.

The discovery of oil in commercial quantity in Northern Nigeria comes at a time the world  is moving away from oil, as a rapid global shift from fossil fuels to renewable energy by 2050  is expected to  save the world at least £10trn, according to new analysis.

“The faster we dump gas and oil, the more we’ll save”, researchers at the University of Oxford said, adding that the idea going green will be expensive is “just wrong”.

The peer-reviewed study, published in the journal Joule, used data on energy costs going back several decades, as well as thousands of scenarios of the cost of switching to zero carbon power.

The researchers found that wind and solar energy, as well as battery storage, had become far cheaper than had been originally anticipated, because of better technology and economies of scale.

Professor David Aberuagba , a geologist told Business Hallmark that ” the oil discovery in the North is good, but the reality in the world today is that the world is moving to renewable from fossil fuel. If oil had been discovered about 20 years ago in the region, it would have made a significant difference. Nevertheless, it’s a good development.”