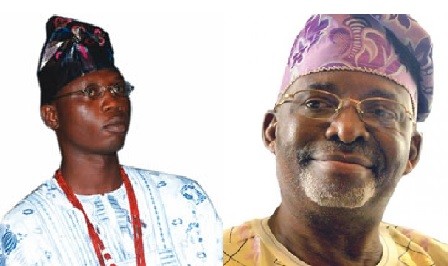 Splinter groups have emerged in the Odua Peoples Congress with a strong demand for the removal of its leadership for leading the group into partisan politics against it core mandate. OLUSESAN LAOYE reports

The Yoruba ethnic militia group, the Odua Peoples Congress (OPC) has not been able to put its house in order since the time there was sharp disagreement between the founder of the group, Dr Fredrick Fasheun and the national coordinator Otunba Gani Adams. The feud between Fasheun and Adams has been on for the past 16 years and has not been resolved, despite all efforts made by the South West leaders to bring Adams and Fasheun together. Although initially, no one could say what led to the dispute however, it was later discovered that politics and the influence of political leaders caused the disagreement between the two leaders.

At a stage it was argued that the approach of the two leaders differ in the mode of operations of the organization. Why it is believed in many quarters that Fasheun prefers that issues are resolved through dialogue, it was said that Adams is inclined to use of force as according to him that is the only way the Yoruba race could be respected and accorded its right in the country.

This disagreement between Adams and Fasheun continued until the issue of contract for security patrol/surveillance of the oil installations started. While the Fasheun’s group laid claims to the fact that they were the ones who applied for the licence to monitor the oil installation locations in the South West, Adams group posited too that it had approached the federal government for the same job. He argued that should the contract be given, it should be shared between the two groups. Eventually, the government agreed on the terms of the two factions.

It is this development that observers believe is now causing fresh crisis within the groups. Right now, the Fasheun and the Adams groups are neck deep in crisis which has led to splinter groups emerging. Adams group has split with one faction disclaiming his leadership and announced his expulsion from the group. Fasheun is also facing the same problem.

It was observed that what is causing the problems in the two camps is politics, while the new faction in Fasheun’s group was said to be sponsored by the All Progressives Congress, APC, the same allegation is leveled against the splinter group from Adam’s camp. It was further said that the just concluded general elections was instrumental to the ongoing factional crisis within the two camps.

Fasheun was said to have ran into trouble in his group as a result of the resuscitation of the Unity Party of Nigeria (UPN). When the party was first launched, it was said to be well within the group but the moment people started jostling for political offices within the group, crisis started. What was also said to have widened the problem was the alleged attitude of the governorship candidate of the UPN in Ogun, Rotimi Paseda who was said to have engineered some of the loyalists of Fasheun against him.

Although Paseda denied any involvement in the rift between Fasheun and his men, it was glaring that the last elections did a lot to destroy the cordial relationship which has existed between the Fasheun’s group in the past 20 years.

Apart from the role which Paseda was alleged to have played, President Goodluck Jonathan and the leader of the APC, Asiwaju Bola Tinubu were said to have contributed to the problem. It was alleged that because Fasheun was well disposed to Jonathan’s second term bid, the leadership of the APC were alleged to have set up another group to counter him so that his role in ensuring massive votes for Jonathan would not be effective. The money allegedly released to them for the election which did not go around was attributed as another factor that caused the crisis within the Adams and Fasheun’s group.

The arrow head of those against Fasheun, comrade Dare Adesope while announcing the sacking of the founder of the OPC, said Fasheun should no longer be addressed as the National President of the group but the founder. He claimed that he has been appointed by the entire body of the OPC as the president. His argument was that the OPC should not be a monarchical system where a person would be there for life. He pointed out that the entire Yoruba race has lost confidence in the leadership of Fasheun, adding that there was the need to appoint a new president of the OPC so that the confidence the Yoruba people in the organization can be restored. He argued that OPC was not set up for political reasons, but to salvage the people of the Yoruba nation.

But Fasheun, who has remained calm in the face of provocation and insult from the young elements of the group, said he was not moved, as he said that he still remains the founder and the president of the organization.

In the case of Adams, he is now facing two different battles within and outside. His group has not been able to come together with the Fasheun’s faction which has continued to insist that he has been suspended from OPC. At a stage Fasheun instituted N10billion suit for what he called defamatory statement from Adams, who described him as a mole in OPC. With Adams still having issues in the past 16 years with Fasheun over who is the leader of the group, a new faction has now emerged in his camp as well.

The faction is headed by the national publicity secretary of the group who insisted that Adams should not be referred to as the national coordinator of the OPC. Akinpelu argued that Adams has had enough since 1994, adding that it is time for him to go. He pointed out that his group would not relent in its efforts until Adams quit as the leader of the group.

Akinpelu pointed out that the battle to remove Adams did not just start, arguing that they have been on it since 2007. He alleged that Adams collected money from some governors in the South West in 2003 and that he (Adams) like the allegations against Fasheun has betrayed the Yoruba people and the OPC.

He further argued that if they could curb the excesses of Fasheun who then is Adams that cannot be put in checks. He therefore asked him to resign to uphold the oath of the organization which is that if you betray the group you have to quit. Akinpelu also cited the rally which was held in Lagos for President Jonathan as one of the major reasons why members in his group decided that he should quit. According to him, he was warned against holding the rally because he was told that the OPC was not designed for politicians to use but to protect the interests of the Yoruba people.

Speaking further on why they are calling for the removal Adams, Akinpelu alleged that he collected N1.6 billion from the presidency for poverty alleviation, which according to him is different from the pipeline monitoring. He further alleged that the money he was referring to was collected on March 2015 the day OkeIbadan festival was held. He pointed out that they had already told Adams that if he wanted to join politics he should quit the OPC.

But the spokesperson for Adams, Mr. Segun Akanni said those who are calling for the removal of Adams as the national coordinator of the OPC is on their own. He pointed out that some of them are being used by some politicians, saying that the facts about their activities would soon be revealed.

Adams in his reaction to the allegations against him said that some of the people calling for his removal are people without any weight in OPC. Some of them he claimed are faceless, adding that he would not allow anybody to detract his attention from defending the rights of the Yoruba nation which have been his primary objectives. He said that he has been all out over the years to protect the interest, integrity and the cultural heritage of the Yoruba people at home and in the Diaspora.

Meanwhile, Yoruba leaders in Ibadan had condemned the activities of both Fasheun and Adams during the last general election. They disclosed at the House of chiefs  that the roles the two factional leaders of the OPC played during the 2015 elections was inimical to the progress and the yearnings of the Yoruba people, who were marginalized by the Jonathan’s government.