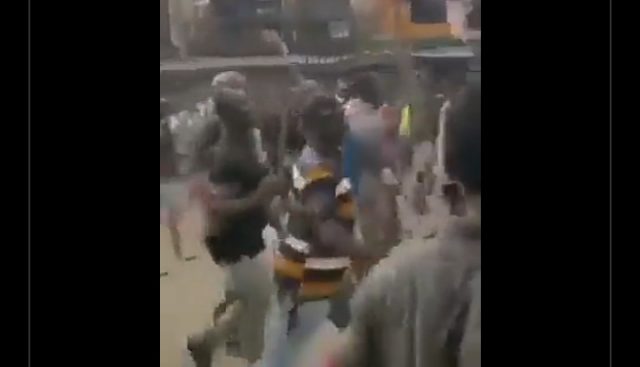 One person is reported to died following a clash between traders and hoodlums at the Alaba International Market, Ojo, Lagos on Wednesday.

Trouble fight, it was gathered, began in the morning, forcing businesses from Chemist Bus Stop up to Saint Patrick’s to shut down as people scampered to safety.

The trouble was said to have started on Tuesday after the taskforce of the traders stopped the touts from extorting motorists and customers.

Traders were said to have become tired of the extortion from the area boys who not only tax shops on the roadside and commercial vehicles but also harass customers who come from different parts of West Africa to buy goods, Nation reported.

The touts were alleged to have consistently extorted vehicles loaded with wares while leaving the market, which became a source of worry.

To prevent the illegality from continuing, the traders through their taskforce, it was gathered, warned the touts to stop the extortion, Nation reported.

They were said to have also directed all traders to stop any form of payment to the area boys from Monday in a bid to assert their position.

The touts, who didn’t find the nonpayment funny, decided to attack on Wednesday, disrupting business activities.

Reports said the violent confrontation between the touts and taskforce left one person dead while many others sustained varying injuries.