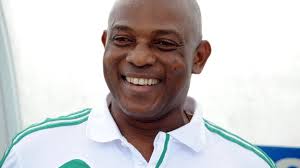 Stephen Keshi has been re-appointed as Nigeria coach on a two-year contract after 10 months of uncertainty over his future with the Super Eagles.

The 53-year-old signed the contract in Abuja on Tuesday following days of speculation over the decision of the Nigeria Football Federation to hand him the job.

Keshi’s previous contract ended after the World Cup in Brazil, where he took Nigeria to the second round.

He worked on a per-game basis during the country’s ill-fated qualifying campaign for the 2015 Africa Cup of Nations in Equatorial Guinea.

His new contract is expected to last till 2017 and would be determined by success or otherwise in the AFCON qualifiers and the tournament in Gabon.

He will also be supervised by the NFF Technical Committee.