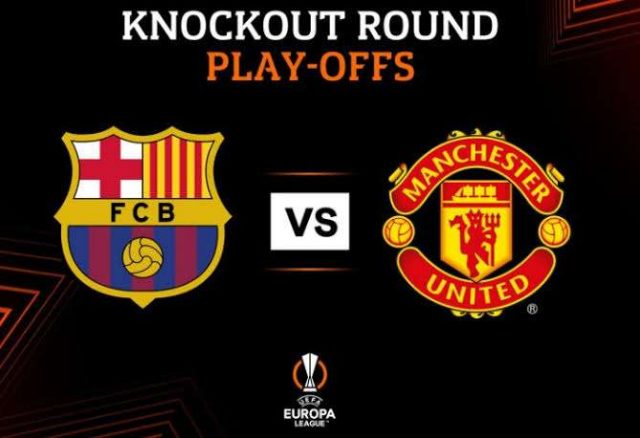 English side, Manchester United have drawn Spanish giants, Barcelona in their Europa League playoff round.

United’s failure to win Group E has pitted them against a team relegated to the competition from the Champions League and Barcelona finished third behind Bayern Munich and Inter Milan.

There is immense history between United and Barcelona in European competition dating back to their European Cup Winners’ Cup tie in 1984.

United recovered from a 2-0 defeat in the first leg to beat the Barcelona of Diego Maradona 3-0 in the return leg in what is still regarded as the greatest atmosphere at Old Trafford.

Alex Ferguson’s United became the first British team to triumph in Europe since the Heysel disaster in 1985 by defeating Barca in the 1991 European Cup Winners’ Cup final in Rotterdam.

Johan Cruyff’s ‘Dream Team’ taught United a harsh lesson with a 4-0 drubbing in the Champions League group stage in 1994 and, four years later, United and Barcelona played out two pulsating 3-3 draws at the same stage of the competition.

United reached their third Champions League final by overcoming Barca 1-0 at Old Trafford in 2008 through Paul Scholes’s sliced strike but, under the guidance of Pep Guardiola, Barca outclassed United in the 2009 and 2011 finals.

In 2019, United were defeated 4-0 on aggregate by Barcelona in the Champions League quarter-finals.

The ties will be played on February 16 and 23, with the first leg to be played at Camp Nou. United’s Premier League fixtures at home to Leicester and Brentford on the weekends of February 18 and 25 are both expected to be moved to the Sunday slots.

In other high-profile fixtures, Juventus will take on Nantes while Sevilla will square up with PSV.