Home Lifestyle Kai, this is unfair to our Comrade Gov! 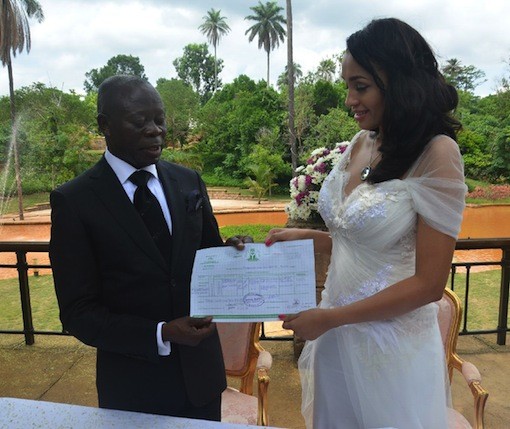 I am sure that the ‘culprits’ in this case, know that marriage, of whatever making, has the backing of God. And that there’s a biblical injunction that says ‘’he who finds a wife, finds a good thing.’’

Good. Now, where did our comrade governor, Adams Oshiomhole get it wrong? After few years of waiting, searching and mourning his late wife, he eventually found a replacement and last Friday solemnized the union before all and sundry according to tradition.

The beautiful lady, Iara Fortes from Cape Verde, was handy enough and was accompanied by her parents, to signed the dotted lines with her heartthrob in Edo State.

Among the dignitaries that witnessed wedding included the President-elect, Muhammadu Buhari, Senator Bukola Saraki and a host of others. In fact there was nothing to hide about same. It was a remarkable event that filled a yawning gap.

But trust our fast-fading social media, less than 24 hours after the historic shindig some of them began to paint ugly pictures about same. And the one that touched me most and proved that these faceless spoilers have no respect for even their father is the one that insinuates that ‘’Shawty (meaning the bride) say she no come for the body o, she come for the money ooo!”

I see that as the height of mischief and disrespect for a man that has done well in the development of our nation. There is no age disparity in marriage, what matters is the love that goes with it, with other things following suit. Some say it’s because he didn’t consider a Nigerian babe. After all, ‘body na body’.

‘’The lady that God has directed to my path and heart to marry is not and was not a model. Of course she looks beautiful and I understand that is why people assume that this kind of a lady must be a model, but of course she is a model in my heart and we hope and pray that we will be models in the heart of our God which is the most important thing,’’ he said.

Who the cap fits, let him wear it. Happy remarried life, Comrade.