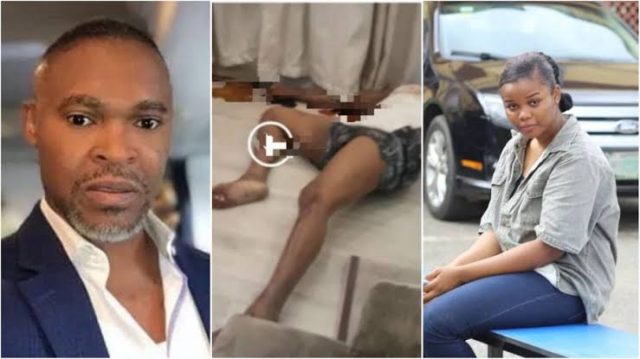 The alleged killer of Super TV CEO, Usifo Ataga, Miss Chidinma Ojukwu, as denied killing him, noting that he ran away from him in fear.

This is as a Lagos High Court sitting at the Tafawa Balewa Square, on Tuesday, continued the trial of Ojukwu.

An undergraduate of the University of Lagos, Akoka, Ojukwu was arraigned alongside Adedapo Quadri and Chioma Egbuchu on October, 12, 2021, on nine counts over the alleged murder of Ataga.

In the video, she said she did not know who killed the deceased as she had gone out on the day of the incident.

She said she saw Ataga on the floor when she came back, and immediately packed her property and left because she was scared.

On the last adjourned date on October 11, 2022, the video recording was played, showing the lifeless body of Ataga.

A part of the video had also shown Ojukwu’s confession where she said she killed the deceased on her own.

In the video played on Tuesday, Ojukwu was asked why she denied knowing the deceased during interrogation.

Ojukwu said, “I don’t know who came in after I left the room. When I came back, I saw him bleeding. I had to leave because I was scared, I did not kill him, I don’t know who killed him.”

She said she couldn’t call for help when she saw him in a pool of blood because she was scared, noting that she also picked the deceased’s two iPhones and Macbook, which were among her things before she left.

The prosecutor, Yusuf Sule, called the ninth witness, DSP Olusegun Bamidele, who explained how the hand-written statement of the first defendant was taken and how other defendants were arrested.

Bamidele said, “She started writing by herself, but because her handwriting wasn’t eligible, I told her that she should ensure that her writing was legible or write in capital letters. It was at that point that she said I should write for her and she confessed to killing the deceased.

“She also mentioned how she killed Michael Usifo Ataga and went away with the knife, phones and Macbook laptop. We took the first defendant to Computer Village with her laptop and we located the phone hub.”

Bamidele said one Yomi confirmed that there was a transaction between his colleague and Ojukwu over the laptop.

He said, “That was how the Macbook was recovered and Ojukwu confessed that she was the one who sold the laptop to them. We studied her call logs and noticed that there was a frequent call log between June 15, 17, 18 and 21, which led to the arrest of the 2nd defendant. He threw away his phone through the window and also attempted to jump through the window before he was arrested.”

The witness said four other phones were recovered from the second defendant, who explained how he met Ojukwu.

Bamidele also said the second defendant disclosed how Ojukwu had asked him to procure Loud smoke and Rophynol for her a number of times which he delivered to Lekki.

The witness said the third defendant was arrested through the help of the foster father of Chidinma, Onoh Ojukwu, and their uncle, Obi, alongside their mother.

The case was adjourned till October 20, for continuation of trial.