It is unlikely that one would find Rivers State governor, Nyesom Wike, in a gathering of elder statesmen and politicians discussing or make demands for the restructuring of the country. He simply has not time for long talks. He goes down to business, and within the nearly seven years he’s been governor, he has done more to advance to cause of true federalism than any individual or conference has managed to since the start of the fourth republic.

Last week, Wike, a lawyer who has continued to deploy his versatile knowledge of the country’s constitution to stretch the its observably unitary constitution to the limit, achieved yet another breakthrough. The Rivers government had instituted a suit challenging the unlawful deductions by agencies of the federal government from the Federation Account.

In the suit marked FHC/ABJ/CS/511/2020 and instituted on its behalf by former president of the Nigerian Bar Association, Joseph Daudu (SAN), Wike’s government had challenged the decision of the federal government allocating funds directly from the federation account to fund some of its agencies claiming that the decision violated Section 162 of the 1999 constitution.

And on Wednesday, a Federal High Court in Abuja, presided over by Justice Ahmed Mohammed, ruled in its favour, stopping the Federal Government from further making deductions from the Federation Account to fund agencies not listed in the 1999 Constitution for direct allocation. The court also declared as illegal, unlawful and unconstitutional, the direct allocations made so far by the government from the Federation Account to fund the Nigeria Police Trust Fund.

Justice Mohammed held that Section 161 and Section 162 of the 1999 Constitution were glaringly breached by the federal government in making direct allocation to the Police Trust Fund from the Federation Account, noting specifically that Section 162 of the 1999 Constitution is clear and unambiguous to the effect that only the federal, state and local governments shall be allocated funds directly from the Federation Account.

According to it, Section 4 of the Nigeria Police Trust Fund Act 2019 relied upon by the government to justify the unlawful deductions from the Federation Account is inconsistent with Section 162 of the 1999 Constitution which recognizes only the federal, states and local government areas.

Justice Mohammed consequently ordered that the fund belonging to Rivers but used to fund Nigeria Police Trust Fund by the Federal Government be refunded to the state, but fell short of extending similar order of refund to the 35 remaining states on the grounds that they were not parties in the suit and that Rivers State as the plaintiff in the matter did not file it on behalf of others.

“I have carefully perused the issues raised by the plaintiff and I agree that no other person or entity is permitted to benefit direct fund allocation from the Federation Account,” Justice Mohammed said.

Regardless, the preliminary objection was dismissed by Justice Mohammed on the grounds that it was misplaced, absurd and lacking merit.

Wike has achieved another milestone victory for true federalism, on the back of his successes against the federal government on the matter of Value Added Tax (VAT), has unwittingly sparked a revolution for true federalism in Nigeria with his recent legal victories against the Federal Government of Nigeria, causing other governors who had been somewhat too timid to demand their rights from an overbearing federal government.

Dogged in his beliefs, Governor Wike had last year dragged the Federal Inland Revenue Service (FIRS) before a Federal High Court in Port Harcourt demanding that the power to collect VAT should be conferred on the state and not FIRS, what eventually proved to be the most defining legal battle of 2021 and triggered a heated debate among the country’s governors and the different geopolitical regions.

“Wike’s courage and audacity is what the Niger Delta and indeed Nigeria needs to move to the next level,” says former member, House of Representatives, Hon. Tunde Lakoju.

The presiding judge in the VAT case, Justice Stephen Pam, had held that the Rivers State government and the other 35 states had the powers to collect VAT within their territories.
While the VAT controversy raged, many states of the federation, apparently buoyed by Wike’s victorious, have also sued the Attorney General of the Federation (AGF) and Minister of Justice, Abubakar Malami (SAN), over alleged failure by the federal government to remit funds generated from stamp duties into the accounts of states.

A realist, Wike knew quite well that the battle is far from over and that the wounded Federal Government and its agents would soon regroup and launch a counter attack. He quickly sponsored an executive bill on VAT collection in the Rivers State House of Assembly to cement his victory.

Barely an hour after the Rivers assembly passed and transmitted the bill to him, Wike signed it into law.

Speaking at the ceremony, the governor said that the judgment had addressed the illegality perpetrated by the Federal Government in the collection of VAT in states.

According to the governor, states are deliberately strangulated and turned to beggars with the take over and collection of taxes meant for them by federal agencies.

“But we are standing on the part of history as representatives of the state to have taken the bull by the horns to challenge the illegality of the Federal Government through the Federal Inland Revenue Services,” he had said.

“We are all aware that states have already been strangulated. Most states depend on allocation from federation account. States have been turned to beggars. Hardly will any day pass that you won’t see one state or the other going to Abuja to beg for one fund or the other.. ”

As was expected, however, an onslaught from the federal government soon began. FIRS first warned all individuals and companies paying consumption taxes in Rivers to continue to pay their taxes to the agency while explaining that it had appealed and also applied for a stay of execution of the judgment that ceded the power to collect VAT to states.

Again, Wike floored the Federal Government in the court as Justice Pam rejected FIRS motion for a stay of execution, arguing that granting the order would negate the principle of equity.
The governor, while speaking at a stakeholders meeting, ordered companies based in the state to start paying their VAT to the state government beginning in September.

Lamenting the injustice in the country, Wike disclosed that Lagos generated N46.4billion VAT revenue in June 2021 but received only N9.3billion from government, Rivers N15 billion, but got N4.7billion in return, while Kano generated N2.8billion in the same month and got the same N2.8billion back.

“Sometimes, you don’t want to believe these things exist. I am not challenging the FIRS from collecting VAT in Abuja. Let it be understood. The law says Rivers must collect VAT in the state.

“The Federal Government surreptitiously lobbied to amend the constitution to place VAT collection in the exclusive legislative list. We have challenged it and we have no apologies to anybody. I don’t want to be in the good books of anybody, but in the good books of God.

“You don’t bully a state like us. The FIRS should be very careful. I have the political will to do a lot of things. If they continue to bully us, I will take over all their offices in the state.

“From this September, we must collect all our VAT. All the banks playing pranks by saying they have not heard from their head offices, I will seal off your branches. If I say I will, know that I will”, the governor had warned.

His crusades heightened awareness among many. It has also spurred calls and actions for change. Many Nigerians, particularly those from the Southern part of the country who desire a change have raised questions on how the nations wealth and offices are currently being shared and whether the South should continue to subsidise the North.

Emboldened by Wike’s successes in courts, many of his docile colleague-governors have suddenly woken from their slumber and are poised for war in an attempt to be free from the stifling control of the Federal Government.
Some states like Lagos, Akwa Ibom and Delta followed the footsteps of Rivers.

For instance, Lagos State Governor, Babajide Sanwo-Olu, also signed into law the Value Added Tax Bill that confers the power to collect VAT in Lagos on the state government. The Lagos State Government also subsequently applied to the Court of Appeal, Abuja Division, to be joined as a co-respondent in the appeal filed by FIRS challenging the judgment of the Federal High Court, Port Harcourt ceding the power to collect VAT to states.

“Wike is a principled and courageous man with a load of dexterity,” noted former Deputy Speaker of the House of Representatives, Hon. Austin Opara. “A reliable ally, and that is Nyesom Wike.”

The VAT war has since moved to the Supreme Court, amid efforts by some governors siding with the federal government to broker a form of truce.

The the attorney-general of the federation, Abubakar Malami, had gone to the Supreme Court to challenge Wike’s stance on the VAT issue. And even as the federal government, with the state apparatus at its disposal, has continued to collect VAT, Wike has since vowed to fight on, all the way to the apex court.

The system may eventually overwhelm him, even as he has a little over a year to serve out his tenure as governor, but by the time he leaves office as Rivers governor on May 29, 2023, Wike would have earned his place in the league of brave statesmen, who fought unjust systems to the hilt. 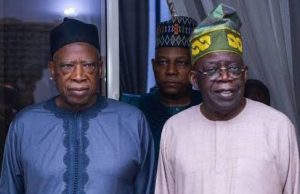