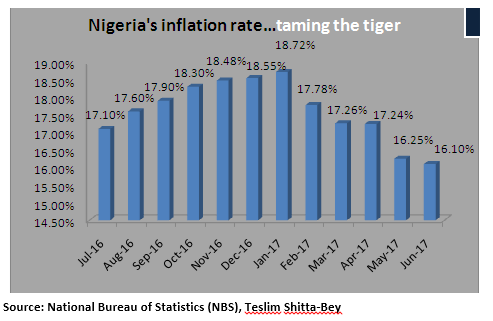 Godwin Emefiele, the usually taciturn Central Bank of Nigeria (CBN), governor smugly remarked that the country could not afford an interest rate reduction because the economy was still fragile and that it was in the overall interest of Nigerians to grit their teeth, hunch their backs and generally get 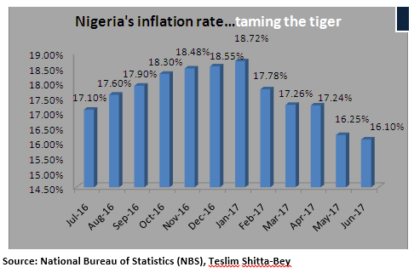 on with their lives, even if this was at the cost of double digit borrowing rates. As far as the CBN boss was concerned inflation was a bogey man the Bank was determined to slay even if everyone else had to die in the process.  Of course he did not put it in theses graphic terms but he might as well have.

The CBN’s recent Monetary Policy Committee (MPC) meeting of the 25th September 2017 was a study in when doing nothing means more. By not changing policy rates over seven consecutive quarters the monetary policy lords had turned standing still into a form of art, but understandably so; by keeping Monetary Policy Rate (MPR) at 14 per cent and cash reserve ratio (CRR) at 22.5 per cent for almost two years the CBN has been able to pin inflation down from a staggering 18.75 per cent in the middle of 2015 to a relatively sober 16.01 per cent by the end of June 2017. The quick wins in inflation taming has lulled CBN policy makers into what behavioral economist have called ‘alternative blindness’, a situation where what is good becomes the enemy of what is best, since ‘success’ at something suggests no need to look for something better.

Much ado about inflation

Emefiele’s sumo-slamming of inflation in the last few quarters has led him and his band of merry analysts to assume that they are getting the job done and nothing else need be said. Unfortunately they are wrong. The CBN’s chief strategists are victims of what behavioural economists have called ‘alternative blindness’, they see a solution to problems as either this or that and ignore the shades of opportunities that lie between both extremes. Furthermore the monetary authority also appears to be badgered by a ‘winner’s curse’ where the successes recorded by the Bank in bringing inflation to just over 16 per cent last month from the towering 18.72 per cent at the beginning of the year has made officials impervious to arguments that the economy needs to be allowed to grow in real terms to ensure that inflation continues to fall; a clear indication that monetary restraint is having increasingly less impact on inflation. 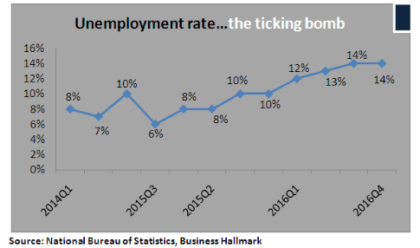 Between January 2017 and February inflation dipped from 18.72 per cent to 17.78, representing a dip of 5.02 per cent; between March and April 2017 inflation dipped further from 17.26 per cent to 17.24 per cent representing an almost nonexistent 0.12 per cent drop; flanked between May and June the inflation fall accelerated as average consumer prices slid from 16.25 per cent to 16.10 per cent, a dive of 0.92 per cent. Squeezed between July and August inflation spinned from 16.05 per cent to 16.01 per cent per annum, showing a -0.25 per cent decline. The CBN’s tardiness in holding up interest rates has , therefore, become an increasingly weak lever to check inflation, the recent stability in the foreign exchange market is less the result of high domestic lending rates as it reflects the success of greater market flexibility in trading forex through the newly created autonomous window, NAFEX. 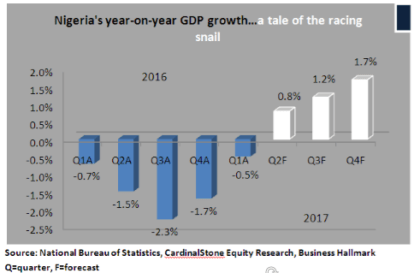 Price Waterhouse Coopers (PwC), an international Consulting and Accounting firm carried out a survey in the course of the year and found that top on the worry list of local economic agents, particularly manufacturers and traders were, first, exchange rate, 25 per cent of subjects interview considered this as the major problem of the economy, second, was inflation with a 19 per cent stroll in and then economic uncertainties with 8 per cent of respondents considering this to be the most critical pain point for the economy. In other words over 50 per cent of the perceived economic challenges of the economy are spread amongst issues related to exchange rate, inflation and uncertainty. If the issue of the high cost of domestic credit is added to the mix this would account for 60 per cent of the perceived challenges of Nigerian businesses.

This, in a manner, explains why the CBN has been adamant about keeping interest rates high and refusing to knock down its indicative policy rate (MPR) from 14 per cent over the last three quarters to what analysts see as a preferable rate of 12 per cent rate, which would stimulate economic growth and reduce unemployment.  Emefiele, during the Monetary Policy Committee (MPC) meeting of the Bank held recently between September 25th and 26th, 2017, insisted that the economy was too fragile for rate cuts and that any attempt to do it now would hurt the relative stability of the foreign exchange market. This is only half true. Most banks are locked in severe liquidity crunches and reducing policy rate 200 basis points may lead to an increase in demand for credit but this would not translate to an increase in credit supply as the CBN’s funding of governments fiscal expansion by way of treasury bills has effectively raised the cash reserve ratios of commercial banks above the nominal 22.5 per cent official requirement.

A fall in interest rates would ease the financial burdens of manufacturers as they refinance their existing loans at lower forward rates thereby improving their bottom lines and helping them sustain output and employment.

The employment problem in Nigeria is growing fast and thick as the economy drawls at a growth rate of 0.55 per cent at the end of June and is not likely to go above 0.9 per cent by year end 2017. The consequences of falling income per capita are likely to be dire as lower incomes would lead to lower output which again would lead to lower tax revenues and wider budget deficits which would result in the sale of additional treasury bills which in turn raises interest rates and then forces manufacturers and other economic agents out of the domestic money market resulting in lower output. Thus the bricks of a vicious poverty cycle become set.

National average unemployment rate is currently around 14 per cent but for those between 18 and 34 years of age the figure is closer to 24 per cent. Given that 70 per cent of Nigeria’s population is below the age of 35, the implications of rampant unemployment are dire, the CBN’s governor’s argument that the fiscal authorities are doing a decent job of growing the economy, especially as the country has just elbowed past its first recession in twenty five years is clever politics but appalling economics.

Monetary theory suggests that the custodian of money, the CBN’s greatest impact on average price levels occur when output and the number of times money changes hands is fairly constant. This is what once gave rise to the late MIT Professor of Economics Milton Friedman’s famous or infamous statement (depending on which side of the theoretical fence you sit on) that inflation is, ‘always and everywhere a monetary phenomenon’.  In recent years few economists argue with this fact but they do contend that in the short term monetary policy is fairly unpredictable and ineffective as a policy instrument as both output and ‘velocity’ of money move, ‘with the motions of a slithering snake’, says economist Ayo Adebanjo, who has done some local econometric work on establishing the relationship between inflation and money supply.

The CBN’s tight fist over interest rates and its warm accommodation of loose fiscal spending are contradictory policy positions creating a murky situation allowing government to go on a dangerous spending binge while private sector manufacturers get nudged out of the local money market. The consequence has been slower than desired economic growth and a higher level of domestic unemployment.

According to industrialist Surajudeen Akinyemi, chief executive officer of Surak 713 feed mills, ‘if we do not start getting the pricing of credit right, we could find ourselves in that scary place of high unemployment, suppressed inflationary pressure and massive social dislocation. In other words the worst of all worlds’, he notes.

By the end of the second quarter of 2017 the Ghanaian economy was able to stir up an impressive growth rate of 9 per cent or 16 times that of its West African neighbor Nigeria which grew at 0.55 per cent over the same period. Nigeria’s fiscal authorities had earlier in the year boasted that the country would spend itself out of recession, in a mild manner, this was achieved but at what cost?

Over the last three quarters of 2017, the treasury has raised staggering amounts of bills and bonds to finance fiscal spending. This has created a dangerous fiscal situation where both domestic and foreign debts have escalated as domestic interest rates have risen on the back of tightening private credit. The government’s spending has primarily been to cover recurrent commitments such as salaries, pension arrears and a large sea of other administrative costs. Unfortunately this spending has not lifted the economy or led to appreciable growth of the real sector. The Keynesian theory of spending an economy out of a recessionary lull assumes that increasing demand for goods and services would be met by added demand for production of goods to satisfy the new level of aggregate expenditure, this has not happened.

The reason for the lack of real sector growth despite rapid fiscal spending is that the supply and demand for money curve for the Nigerian economy is steeply inelastic. This means that a sizeable increase in the demand for money would elicit a less than proportionate increase in supply of cash no matter the interest rate adjustment. Since rates have remained more or less static with the CBN sticking to its tight monetary policy regime, the possibility of fiscal policy having a major impact on output is a beggars dream. The inelastic nature of Nigeria’s money supply curve in the short term makes fiscal policy irrelevant. No matter how much money finance Minister Kemi Adeosun pushes through the economy, the CBN’s fixed interest rate regime would make the minister look like a hard working cyclist trying to do a kilometer in under a minute while busy peddling on a stationary bicycle! (See chart).

Several economists, including Akinyemi note that economic theories have their place, ‘but just as Jesus noted in the Bible that the Sabbath was made for man and not man for the Sabbath, it would be a precarious project for the CBN and the Finance Ministry (MoF) to impale the economy on conflicting theories’.  Nigerians were not made for the theories of dead economists; indeed the modern th 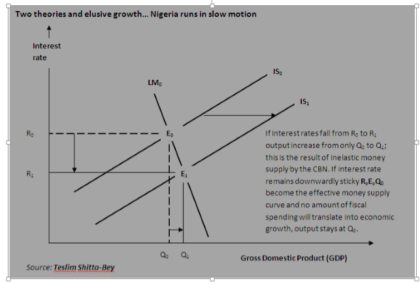 eories of the living ones would do them a whole lot better.