The Flying Eagles lost the match 2-4 to the group favourite Brazil in their opening game played in  Taranaki in New Plymouth, New Zealand.

The match, which started at 2 am Nigeria time, had the Flying Eagles in control but Brazil capitalized on the Nigeria’s floppy defensive error when it opened scoring in the 4th minute.

Flying Eagles’ hope was rekindled when the Captain of the side, Musa Yahaya equalised in seven minutes and another goal scored in 27th minutes.

But the South Americans took the victory away from Nigeria when it scored in the 35th, 60th, and the 80th minutes to make it 2-4 against Flying Eagles.

In the same group, Hungary defeated Korea by 4-1. At present, Flying Eagles is third on the table and must win the two remaining matches to qualify for the next round.

Speaking after the match, the Assistant Coach of the Flying Eagles, Nduka Ugbade blamed the players for showing too much respect to the Brazillians, adding that the match would have ended 6-1 in favour of Nigeria if the boys had used all the begging chances.

“Now we must win two remaining matches to progress in the competition. This is what we must do and I promise that we will do it,” Ugbade said. 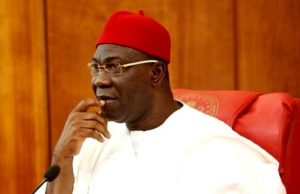