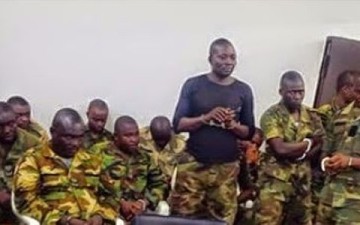 The Counsel for 12 soldiers condemned to death   by a General Military Court Martial for alleged mutiny,   Enokela Onyilo-Uloko, has cried out to Goodluck Jonathan and the Chief of Army Staff,Lt. Gen. Kenneth Minimah.

Onyilo-Ukoko told our correspondent on Sunday that the soldiers who were sentenced to death by hanging on September 16, 2014, were being denied access to their family members and counsel.

He said this was contrary to an order of the Court of Appeal, Abuja.

Onyilo-Uloko said those in charge of the Army   facility in Lagos   had ignored the directive of the court   that the   soldiers be allowed access to their wives, parents, other relatives and counsel .

He claimed that he was in possession of information that the soldiers were unable to carry out their responsibilities as bread winners to their families.

He said, “When the Court of Appeal granted a stay of execution of the Court Martial, it also granted an order that the 12 soldiers should be visited by their wives, parents and other relatives but there seems to be a deliberate inhuman treatment of these people.

“The President and the COAS should please intervene. I am making this call because the COAS may not be aware of this development.

“I know that the COAS could not give such orders to humiliate the soldiers. It could be the work of some overzealous people in charge of the detention facility. We appeal to the COAS and the President to take a look at it.”

When our correspondent contacted the Acting Director, Army Public Relations, Col. Sani Usman, he asked for time to verify the claims of the lawyer.