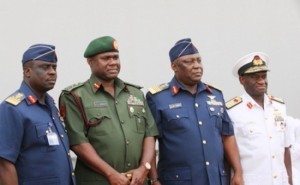 These top military chiefs were appointed by the outgoing President Goodluck Jonathan, when on 16th January, 2014, a statement issued and signed by his media adviser, Dr Reuben Abati announced their appointments in replacement of the then chief of defence staff, Admiral Ola Sa’ad Ibrahim; chief of army staff, Lt. Gen. Azuibuike Ihejirika; and chief of naval staff (CNS), Vice Admiral Joseph Ezeoba.

Speaking with LEADERSHIP last week, an informed security observer explained that it was the usual practice that service chiefs departed from the scene once the tenure of their principal expired in order to allow the new helmsman to begin on a fresh note.

“It is the norm; service chiefs always depart from the scene with the man who hired them in order to allow the new leader to bring in those who are loyal to him. Remember, when former President Olusegun Obasanjo came in, he sacked those who worked for General Abdusalami Abubakar and brought his own into the offices.

Speaking further, our source, a retired military officer, explained that with the security challenges going on in the country, the incoming president would like to overhaul the security agencies with a view to bringing in those whom he believes would help him accomplish his vision.

“With or without the ongoing war against the terrorists, Buhari would inject his own men whom he believes would help him implement his vision for the nation in terms of the security challenges. Those who are there now have been doing their best and we are seeing the results, yet that should not stop Buhari from appointing his own men at least for security and loyalty reasons”.

Our source who reminded us that Jonathan himself replaced those he inherited from the late President Umaru Yar’Adua also disclosed that the new president, General Buhari would name a new NSA and new DG, SSS in his first week in office who would help him in identifying those who could be in charge of all the security agencies.