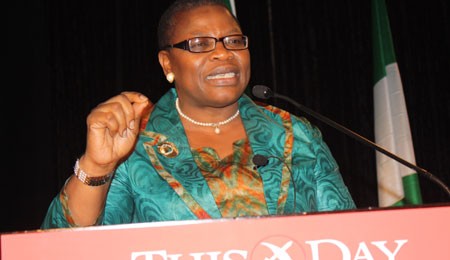 Former Minister of Education, Oby Ezekwesili, on Sunday took to Twitter to criticise the out-going administration led by President Goodluck Jonathan, describing the actions of government on the rescue of Chibok girls as failing Nigerians. Chibok girls were abducted on April 14, 2014 but the Federal Government did not take a proper action to rescue the girls until two weeks later.

Ezekwesili who is one of the leaders of Bring Back Our Girls Movement, said on the anguish suffered and being suffer by the Chibok girls and their parents, that President Jonathan failed Nigerians.

She prayed; “God forbids that in future, any government will repeat what this administration has done; it reduced governance to the “person” of President.”

She argued that when Chibok girls were reported to have been abducted, that the President should have thought of bringing them back immediately, instead of allowing “Jesters” to sow doubts on the minds of Nigerians on whether the girls were missing or not. According to Ezekwesili, the Chibok girls would have been rescued if the Federal Government had taken an immediate action on the matter.

To quote her, “The lowest point was when President allowed jesters to sow doubts in the minds of public on whether the Chibok girls were actually missing.

“Once jesters succeeded in outdoing one another to be the loudest to deny our Chibok girls, the society became polarised rather than unite.

“Terrorism should unite a people. The terrorists are our common enemies. The leader’s duty was to make sure of that at all cost. She regretted that it has become a tough lesson for the future. Terrorism which has become the world most security challenge has unite the people in order to fight the common enemy.

“The leader must show strength even when he/she is weakest. Such strength holds his/her people together. Leaders never crave sympathy”.

Ezekwesili has taken the campaign to free the Chibok girls beyond the shore of Nigeria. She has on several occasions appealed to US President, Barack Obama, and other world leaders who are in position to step into the matter of rescuing the Chibok girls