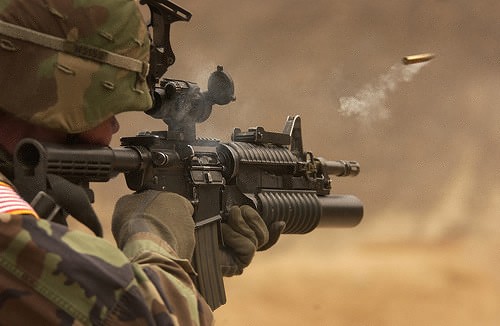 Five Al Qaeda-linked militants were killed in a failed kidnapping in the Philippines as the family of the victim fought back, the military said Thursday.

The Abu Sayyaf gunmen were shot in a sea battle with the victim’s family Wednesday after they grabbed the local businesswoman and dragged her to their boat, provincial military chief Colonel Alan Arrojado told the press.

The family was at their seaside home at the time of the incident, but had armed themselves with guns given the high crime rates in many areas in the southern Philippines, Arrojado said.

Gun ownership is legal in the Philippines as long as the weapons are registered.

The military official said the victim had been wounded in the gunfire.

He said local fishermen found the 48-year-old clinging on to a floating log with gunshot wounds to her breast and ankle. She is now being treated in hospital.

He gave no details about the whereabouts of the other two kidnappers.

The Abu Sayyaf is a loose band of gunmen founded in the late 1990s with seed money from Osama bin Laden’s Al-Qaeda network.

The group is notorious for kidnap-for-ransom activities that target mostly foreign tourists.

It is also blamed for the worst terror attack in the country, the 2004 firebombing of a ferry off Manila Bay that killed more than 100 people