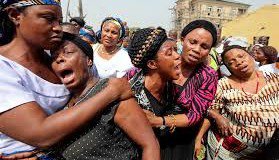 There is no doubt that part of the explanation for the jubilation that greeted the victory of Gen Mohammadu Buhari (rtd) at the last presidential polls was a craving to save the country from the wanton destruction of lives and property arising from a lingering Boko Haram insurgency.

Not only that, Mr. Buhari has an intimidating military credentials, he had also, as a military Head of State, demonstrated zero- tolerance  to a debilitating groups like Boko Haram. He is therefore the right person to rule Nigeria at this time, many had thought.

Hope grew bigger when on his inauguration, Mr. Buhari declared a total war on the insurgents, with a promise to wipe them out in no distant time. A General had spoken tough and the days of the Islamic extremists were believed to be numbered.

But that  turned out to be counter-productive with the militants responding  with a series of deadly bombings that have killed dozens of people across the northeast, the latest being a young female suicide bomber that killed no less than 10 people and injured more than 20 in an attack at a market in Yobe State Tuesday. The blast came a day after another female suicide bomber hit a market in Maiduguri also with casualties.

The militants had carried out attacks near Maiduguri International airport killing eight, and in a mosque, killing about 25. A man blew himself up in a slaughter-house in the same city, killing about 40. But Maiduguri was among the places where Nigerian security forces said they had vanquished Boko Haram.

The more recent attacks are coming after the relocation of the Military Command Centre to Maidugiri, Borno State, on the order of the president, raising more misgivings about the efficacy of the move in the fight against insurgency.

The order had received mixed opinions with some seeing it as a step in the right direction while others did not see any need for the relocation. Capt Aliyu Umar, a security expert is one of those who agreed with Mr. Buhari. Recalling several instances where similar decisions had yielded positive results, Umar believed the relocation would give the military the edge to fight the militants. For him the Nigerian Army might not have had a high number of soldiers running from battles if their commanders had been around.

Another security consultant, Dr Onah Ekhomu, believed moving the military command centre to Maiduguri may not yield the desired result in the long run because of the transformation of Boko Haram’s tactics into pure terror. He said the decision would make the command centre a vulnerable and attractive target for the insurgents, recalling the spirited attacks launched on Giwa Barracks in Maiduguri in the past,

While chairing the African Union (AU), Peace and Security Council (PSC) meeting at the recently concluded AU summit in Johannesburg, South Africa, Mr. Buhari ordered the release of $21 million out of $100 million Nigeria pledged  to the Multinational Joint Taskforce (MNJTF) against Boko Haram, an order, he said, should be carried out in one week.

At the Lake Chad Basin Commission (LCBC) meeting of Nigeria, Chad, Camerron and Niger with Republic of Benin, Buhari had asked the leaders to articulate their needs for onward delivery to the G7 group of industrialised nations.The request was based on the promise by the G7 to support Nigeria in the fight against terrorism when Buhari honoured the group’s invitation to attend its last Summit in Germany.

Governor of Borno State Kashim Shettima had while reacting to serial killings in Borno State last year declared that the insurgents were better equipped and motivated than the Nigerian military. He also stated that the country was in a state of war in his state following the growing spate of killings and attacks by the Boko Haram sect.

“Just a band of terrorists, 50, 100, can really hold a whole community to ransom because — one, they are indigenous to that land. Secondly, they are the ones setting the pace of the war,” Shettima had also said.

Boko Haram attracted international attention, when, on April 15, militants marched into a girls’ school in Chibok,  a remote part of Borno State, kidnapping more than 250 teenagers and loading them in trucks into a dense Sambisa Forest

A perceived government failure to respond to the enraged parents of the girls prompted a rare, grass-roots protest movement to pressure the then President Goodluck Jonathan to take action. Several hundred women marched on the Parliament building in Abuja, and a social media campaign employing the hashtag #Bring Back Our Girls# took off.

But Abubakar Shekau, the self-acclaimed leader of the sect, said in a videotaped message that there would be no cease-fire and that the schoolgirls kidnapped by his group would not be returned.

“All of them have accepted Islam and are now married,” he was quoted as saying. “Anybody that said plans are underway for the release of the girls is just daydreaming.”

The day after the government’s announcement of a cease-fire deal in October, at least 60 young women were reported to have been kidnapped by militants in Adamawa State. Numerous other attacks that followed were also attributed to the Boko Haram militants.

Such official announcements was greeted with broad skepticism in Nigeria, a country where the government had regularly promised a resolution to an insurgency then in its sixth year, without fulfillment.

Boko Haram, which was founded in Maiduguri in 2002 by the Muslim cleric Mohammed Yusuf,  was largely contained to the northern part of the country in the beginning, before expanding its reach with the help of Al Qaeda in the Islamic Maghreb, the terrorist organization’s affiliate in West Africa.

Since 2009, Boko Haram has waged the most brutal insurgency in Africa. It has seized vast amounts of territory, threatening Nigeria’s territorial integrity and opening a new frontier by targeting neighbouring Cameroon.

Officials estimate that some three million people are affected by the humanitarian crisis caused by the five-year insurgency in the north-east.

How did the sect become so strong?

Increasingly through conscription – villagers are forced to join en masse or risk being slaughtered. It is also relying on criminals and thugs, “paying them for attacks, sometimes with a share of the spoils”, according to the ICG.

With ethnic loyalties strong in Nigeria, most Boko Haram fighters are Kanuri – the ethnic group to which Shekau belongs – suggesting that he has influence over some traditional rulers in north-eastern Nigeria. While it is unclear how many fighters Boko Haram has, UK-based finance and security analyst Tom Keatinge puts the number at more than 9,000.

When Boko Haram raids towns, it often loots banks. In 2012, the Nigerian military accused Boko Haram of extorting money from businessmen, politicians and government officials, and threatening them with abduction if they fail to pay up.

Some US officials estimate that the group is paid as much as $1m (£660,000) for the release of a wealthy Nigerian, Mr Keatinge says. With foreigners, the amount is much higher – Boko Haram was paid $3m ransom for the release of a French family of seven seized in northern Cameroon in February 2013, according to a Nigerian government document seen at the time.

With these sources of funding, Mr Keatinge estimates that Boko Haram’s annual net income is $10m. Nigerian researcher Kyari Mohammed believes the group is running a low-cost insurgency, as it is made up mostly of young people from rural areas.

Boko Haram has overrun many police stations and military bases, giving it a huge arsenal – including armoured personnel carriers, pickup trucks, rocket-propelled grenades and assault rifles. And, according to the ICG, it has forged ties with arms smugglers in the lawless parts of the vast Sahel region. Some of its weapons are suspected to have come from Libya, where arms depots were looted when Colonel Muammar Gaddafi’s regime was overthrown in 2011.