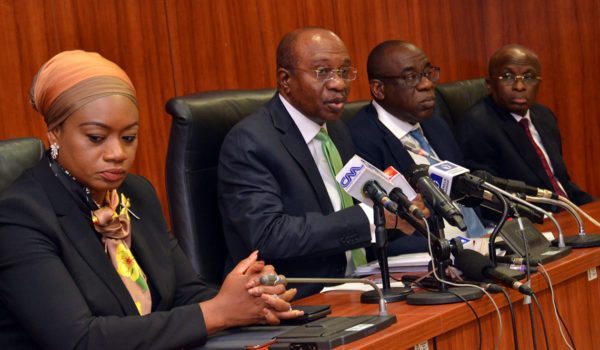 The Small scale and Medium Enterprises, SMEs, sector is emerging as the beautiful bride of deposit money banks in the country as they jostle to find niches to meet the new Central Bank of Nigeria, CBN, policy of increased lending to the real sector of the economy. At stake is the sum of about N1.5 trillion which the banking sector is expected to disburse to comply with the regulation.

The CBN had in July released a regulation requiring banks to benchmark their lending to 60 percent which they had failed to attain although the initial level was 80 percent. Banks had turned away from lending after the crisis of 2010 which led to setting up AMCON to assume liability of their toxic loans to the tune of N7.5 trillion.

But in a desperate move to tackle the shrinking economy, the CBN is leaning on banks to raise their lending, since the regular complaint of the real sector especially SMEs, has always been lack of access to funds from the banks.

Activities of banks in the SMEs sub sector seem to have received a boost in recent times as they are rolling out programmes and products targeting the businesses believed to hold the future of the economy in terms of creating jobs and driving growth.

Most banks are focusing attention on the SMEs to drive their new lending option although they also pose special management challenges in credit administration. Some banks, such as UBA, Fidelity, Access, First bank etc have been promoting the sector as a favoured niche with the introduction of innovative products.

In order to avoid the Central Bank of Nigeria, CBN, sanction, four Tier-I capital banks are expected to increase loan book by N1.2 trillion in the next three months. The four affected banks are FBNH, Zenith, UBA and GTB. In spite of the fact that they have big sizes, the affected banks failed to convert up to covert substantial amount from their deposits as loans and advances to customers, their books have shown.

Their loans to deposits ratios were below 60%, though initial benchmark has been 80%. Noting the development, the central bank has recently demand that all the banks must extend 60% of their deposits collection to the real sector as loans and September 30 fixed as target date.

GTB is expected to create additional loans book of about N145 billion before target date. Also, Zenith Bank must create more than N133 billion loans and advances, just as FBNH needs about N466 billion and UBA must book about N431 billion loans to avoid CBN’s sanction.

Reacting to the directive, Tellimer, a London headquartered developing market financial institution, said that this directive may pose asset quality risks to the sector, as banks may have to lower risk criteria to achieve the CBN’s threshold.

It would be recalled that Business Hallmark reported that Tier 1 banks were not practically lending, given their positive cash position, they were able to closed earnings gap with yield from fixed interest rate market. Many of them ramped up deposits from customers but failed to lend to real sector.

But some analysts have noted that the rush to forcing banks to book more loans in the real sector would result to further increase in the banking sector non-performing loans. Thus, asked government to set economic agenda that increase growth rate and broad base performances other than it selective sectorial targeting.

Against their loans guidance for financial year 2019, FBNH has to increase loan book by 18%, UBA 19%, and Stanbic 18% in order to meet the requirement. GTB has 10% loan guidance and its expected loans growth.

Meanwhile, Access Bank, Fidelity and FCMB Plc would be unscathed by the CBN directive as these banks already have significant chunk of their deposits converted to loans and advances.

It would be recalled that the Central Bank of Nigeria (CBN) released a new guideline for Deposit Money Banks (DMBs) via a circular on regulatory measures to improve lending to the real sector.

The highlights from the circular indicated that with effect from September 2019, DMBs are mandated to maintain a minimum loan to deposit ratio (LDR) of 60% compared to sector LDR of 58.5% as at May 2019 and regulatory maximum of 80%, which is subject to quarterly review.

In a bid to encourage lending to SMEs, retail, mortgage, and consumers, the apex bank assigned a weight of 150.0% to these sectors in the computation of LDR. The CBN also disclosed plans to provide guidelines for the classification of businesses that fall under the named sector categories.

According to the apex bank, a failure to meet the minimum LDR of 60.0% by the specified date will result in a levy of additional Cash Reserve Requirement (CRR) equal to 50.0% of the lending shortfall of the target LDR.

Although bank lending to the domestic economy rose by 8.2% year on year to about N21 trillion as at April 2019, an increasing need to encourage greater allocation to strategic segments within the private sector necessitated CBN’s recent move.

In addition to this, the apex bank may have been concerned that the decline in LDR to 58.5% in 2019 from 67.4% as at May 2018 may negatively impact credit to the real sector if not checked.

Cardinalstone said, “In our view, the new requirement is unlikely to come as a surprise to banks given CBN’s previous references to the need to boost credit to the real sector. Notably, the new floor for LDR represents an attempt to move some banks closer to the relatively higher LDR levels recorded historically”.

“For context, banks such as Stanbic, GTB, and FBNH experienced significant deterioration in LDR in the last five years. Put together, our coverage banks boasted a five-year average LDR of 72.1% relative to 62.3% in the first quarter of 2019.

The firm said that based on first quarter numbers, only ACCESS, FIDELITY and FCMB meet the new regulatory requirement within its coverage banks.

“Assuming deposits are unchanged from first quarter of financial year 2019 levels, non-compliant banks within our coverage -GTB, Zenith, FBNH, UBA, and Stanbic would likely have to grow loans by a mean of 14.3% to meet the requirement”, Cardinalstone stated.

By implication, these banks may be required to create an additional N1.3 trillion in credit assets by September 2019. Our analysis suggests that UBA may likely have to grow loans by 19.4%, while ZENITH could require the least loan growth of 6.2%.

Analysts observed that the estimated loan growth that may be required by GTB and Zenith to meet the regulatory requirement already falls within their financial year 2019 guidance.

Overall, we believe the September 2019 timeline may be too short for non-compliant banks given the unfavourable macro-economic environment. This may force the CBN to extend the current timeline”, Cardinalstone reckoned.

Cardinalstone is of the view that its estimates assume that the new requirement applies to entire group balances for the banks. However, it is likely that CBN’s new measures may only apply to the banks’ operations in Nigeria, given its Nigeria-centric aim of stimulating domestic growth.

In that latter case, first quarter LDR would be lower for banks like UBA (FY’18 – 46.8%) with huge African operations. Our estimates also utilise gross loans in the computation of the LDR. Computations with net loans will lead to a much lower LDR and an increase in the additional credit assets required by non-compliant banks to meet the shortfall.

Tellimer said, “We could see an outcome where banks choose a much higher CRR over rushing to achieve the loan/deposit threshold, to manage asset quality headwinds.

“Bearing in mind that the CRR peaked at 50-60% for some well-capitalised banks (according to IMF Article IV, April 2019), there is bound to be pressure on margins and profitability due to this.

The CBN’s directive favours SME, retail and mortgage loans, which would have a 150% weighting in computing the regulatory loan/deposit ratio.

“This segment has been an area of recent focus, and has been identified as a growth area by many banks in financial year 2019. This would ideally raise the ‘regulatory’ loan/deposit ratio close to the benchmark and could help banks catch up a bit more easily, although the CBN maintains the right to define what constitutes such loans”, Tellimer stated.

At the end of first quarter, Access Bank recorded loan to deposits ratio of 66%, FBNH 48% and FCMB 74%. GTB 53%, Stanbic 56% and UBA 48% and Zenith did 50%. The penalty for not meeting the threshold by the set deadline is an additional CRR levy equal to 50% of the lending shortfall of the target threshold, which would be likely to restrict banks’ ability to invest in government treasuries.

They noted that the rush to forcing deposits money banks to book more loans in the real sector would result to further increase in the banking sector non-performing loans. Analysts asked government to set economic agenda that increase growth rate and broad base performances other than it selective sectorial targeting.

“There is standard policy on cash reserve ratio, it should not be modified to satisfy other objectives other than the reason it was formulated”, Kingsley Ezoh, a senior consultant with LSintelligence said.

Ezoh added that, “The CBN can create special vehicles where target sectors can access funds at a cheaper that to satisfy its urge or economic growth. Look at commercial paper, there are certain companies that have stopped patronizing overdraft or short term loans from commercial banks. They are going for commercial papers even banks are raising funds with it”.

In a note, Afrinvest registered its concerns are that the inconsistency of monetary policy targets, continued financing of the FG and the Apex bank’s perceived lack of independence would continue. Similarly, the firm worry about the bank’s expanding development financing agenda rather than a focus on price stability.

Banks have been bearish mood on booking more loans since 2016 when the recession hit. Also, the CBN had expressed worry over rising case of loan default which led to expanded non-performing loans in the sector. The sector NPL was at about 15%, as banks toxic assets jerked up. Due to need to clean up balance sheet, banks increased investment in the fixed income market to replace booking loans.