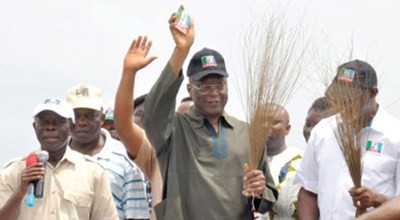 The All Progressives Congress (APC) in Edo, Yobe and Kaduna States on Thursday accused the Peoples Democratic Party (PDP) of planning to rig the governorship and Houses of Assembly elections billed to hold tomorrow. In Edo State where only the state assembly would hold tomorrow the APC for instance raised the alarm over a purported plot by chieftains of the PDP led by Pastor Osagie Ize- Iyamu to rig the state assembly election and the suspended National Assembly election in Orhionmwon local government slated for tomorrow.

The party in a statement signed by its state Publicity Secretary, Godwin Erhahon, alleged that because the PDP fear that a free and fair election would reverse their seeming victory in the inconclusive senatorial election, Ize-Iyamu had concluded the recruitment of some students from the University of Benin ad hoc staff of the Independent National Electoral Commission (INEC) for the election. Erhahon further alleged that the recruited students were paid N100,000 each and electoral incident forms already fraudulently filled to sabotage the election distributed to them. According to him, “they want to use the forms to frustrate the use of card readers and again procure fake results as they as they did in respect of seven wards in the aborted March 28 election.

“They have also recruited hundreds of thugs to unleash mayhem where they cannot rig the election.” He said the police had been informed of the plot, adding that Ize-Iyamu resorted to all these plot because the APC rejected his overture to return to APC soon after PDP lost the presidential election. Reacting however, Ize-Iyamu denied the allegations, saying at no time did he recruit thugs for the purpose of election. He said there was no time did he apply to return to APC, noting that Erhahon must be suffering from insanity as his own aim was to ensure free, fair and credible election. In Yobe State, the ruling party alleged that the PDP had concluded plans to cause mayhem during the Saturday’s election. The APC in a signed press statement by the Director-General of its campaign council, Alhaji Sidi Yakubu Karasuwa, accused the PDP of importing thugs from neighbouring state to cause trouble during the election.

The statement said: “As governorship and state assembly elections inch closer, the PDP in Yobe State has taking back to its old tactics. Credible information available to us indicate that the PDP has imported thugs and hoodlums from Bauchi and other states with the intention to cause violence and disrupt the April 11th elections.” Karasuwa further alleged that, “The PDP has also planned on bringing in fake ballot papers and result sheets through Jigawa State in order to cause confusion, especially in Yobe Zone C. “According to our information, some of the miscreants and thugs imported by the PDP have been lodged around Dagona Village of Bade Local Government area, while others have been kept at an undisclosed location in Gashu’a town. The object is to use those hoodlums kept in Dagona to disrupt the polls in Karasuwa Local Government area and those kept in Gashu’a to cause chaos in Yusufari Local Government area.”

He added that, “The PDP had employed similar tactics in 2011 where hoodlums were brought in from Jigawa State, but the timely intervention of the security agencies nipped the evil machination in the bud.” He also disclosed that there was a foiled kidnapped attempt on a prominent leader of the APC in Yusufari Local Government, Hon. Lawan Ari in his home in Yusufari town in the early hours yesterday by some persons posing as security operatives in fake police uniforms.

He insisted that the attempt, which was hatched at about 1a.m. to harm and kidnap the leader, failed as his neighbours alerted him of the plot. He called on the people to stay vigilant in order to prevent any breach of security during the election, urging them to “promptly call the attention of the security agents in their area if and when they notice anything untoward happening or about to happen before, during or immediately after the elections.” He asked that, “People should also report any suspicious persons or activities capable of breaching the peace or disrupting the peaceful conduct of the elections on Saturday.” In Kaduna State, the APC also raised the alarm over alleged plans by the PDP to disrupt and manipulate the Saturday governorship and state assembly elections.

The North-west coordinator of the APC progressives and elder brother of the party’s governorship candidate, Mallam Nasir El-Rufai, Air Vice Marshal Ahmed Rufai, claimed that intelligence reports available to him had revealed that the PDP had mapped out an evil strategy to manipulate the electoral process in its favour . AVM Rufai at a news conference in Kaduna alleged that the PDP held secret meetings with Electoral Officers across the 23 local government areas and ward electoral officers “where they were promised huge sums of money and a house each at the Millennium City for anyone who delivers his or her local government area.

” According to him, the PDP has “hired thugs and armed them with dangerous weapons marked with APC name and logo to violently attack polling units where APC is popular, such as Abakpa, Kabala, Kawo, among others so as to cancel elections in such areas” adding that various sums of money ranging from N50,000, N20,000 and N5,000 had been paid to the thugs in those areas to carry out the evil plan. He stated further that “as a last resort, they plan to invalidate votes in APC strongholds by engaging thugs to pour liquid materials like ink, engine oil and palm oil on the ballot boxes.

“It should be noted that in quite recent past, the governor has promised fire and brimstone, including personal insults against his opponents during his electioneering campaigns. “It is therefore not a surprise for the PDP under his leadership to be engaged in such a sinister plan in order to win elections” He called on the Independent National Electoral Commission (INEC) and the security agencies to ensure the conduct of credible and peaceful elections on Saturday.

“We are calling on the federal government and the international community to caution the Governor of Kaduna State to desist from supporting such dangerous act, which is capable of disrupting the relative peace being experienced