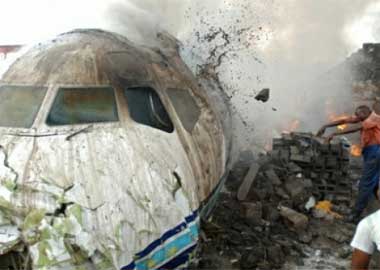 The Executive Airline Services (EAS) Airlines Flight 4226 was a scheduled flight between Jos and Lagos via Kano.
On May 4, 2002, the flight left Mallam Aminu International Airport, Kano for Murtala Muhammed International Airport, Lagos with 71 passengers and crew members aboard.
At about 14:35 local time, three minutes after departing Kano Airport, the aircraft reportedly stalled. It came down in the heavily populated district of Gwammaja about half a mile from the airport on the outskirts of Kano. It sheared roofs from two-storey concrete homes and sliced a mosque in half as it broke apart and burst into flames upon impact. Some 23 houses in Gwammaja area were destroyed, along with a school and the mosque.
The accident resulted in the deaths of 64 passengers and 7 crew members out of 69 passengers and 8 crew members. In addition to that, at least 78 civilians on the ground perished.
Idowu Adebayo, General N.T.H. Bozegha, Naomi Ukpong, Adesina B. A., Najeeb Ibrahim (Lebanese) and Ikegwuoha, E.O. Bri. General were the survivors of the crash.
Eye-witnesses said they saw the plane swaying from side to side just after take-off, and then it went into a nose dive.
As a result of an investigation carried out by the Nigerian Ministry of Aviation, the cause of the crash was ruled to be pilot error. The findings of the investigation stated that the engines failed following their intake of a large amount of dust. This occurred as a result of the pilot overshooting the runway and continuing the take-off through a grassy area at the end of the runway. Following the engine failure the plane rapidly descended into the neighbouring Gwammaja area of Kano ultimately destroying several structures on the ground.
According to reports, prior to the fatal crash, the aircraft involved in the incident had been grounded on two previous occasions: once in 2001 for eleven days to perform engine maintenance, and again in May, 2002 for 52 days to address engine problems.
An engine was fitted, that belonged to another grounded aircraft. Just ten hours after the new engine had been fitted, flight 4226 crashed at Kano.
IMPORTANT PERSONALITIES WHO DIED
The crash of flight 4226 was a big tragedy for the nation especially because of the involvement of some senior citizens in the crash. Some of important personalities who died in the crash included Sports Minister, Mr Ishaya Mark-Aku, wife of Lt-General Jeremiah Useni (rtd), Mrs. Julie Useni and their last son, Danjuma.Flight 4226 has the highest death toll of any aviation accident involving a BAC One-Eleven.
CAUSE OF CRASH
Pilot error and poor servicing.
LESSONS LEARNT
According to Mr. Sam Adurogboye, the Public Relations Officer of Nigeria Civil Aviation Authority (NCAA), there has been a drop in the rate of air crashes in Nigeria of recent because, the aviation authority is very strict on the issue of aircraft maintenance and servicing.
“No airline operator is allowed to fly a faulty plane these days, no matter how minor the fault may seem. We do constant inspection with our team of engineers on the current state of any aircraft before it takes off,” Adurogboye stated.