The peace that eluded the House of Representatives since inauguration was yesterday brokered with Mr. Femi Ggajabiamila emerging as the House Majority Leader. The development followed the intervention of President Mohammadu Buhari, who met with the All Progressives Congress (APC) members of the lower house.

Gbajabiamila was APC’s preferred candidate for the office of the Speaker. ButThe emergence of Yakubu Dogara  against the wish of the party  caused a massive rift in not just the House but the ruling APC. The Senate also found itself in a similar situation with Bukola Saraki emerging the Senate President at the expense of Ahmad Lawan whom the APC wanted.

APC rejected Saraki and Dogara but had to grudgingly accept them after seeing that the cost of their further rejection outweighed the benefit. But the rift reached a zenith in the House when Dogara refused to bow to the party’s suggested list of Principal Office Holders.

The plan of compensation for Gbajabiamila was to grant him the House Majority Leader position. Dogara, however, resisted this and the House was thrown into confusion before being adjourned to July 21

Effort of APC governors to help resolve the crisis proved abortive. The governors in a bid to make peace had raised a 3-man peace committee headed by the immediate past Speaker of the House and now Governor of Sokoto State, Mr. Aminu Tambuwal.

After the Tambuwal committee met with the group led by Dogara and that of Gbajabiamila, the issue at the centre of the crisis – the sharing of four principal offices – remained unresolved.

Findings showed that the Gbajabimaila group, at its meeting with Tambuwal, had restated its stance that the decision of the APC on the allocation of the offices must stand.

The party had written to the Speaker that the South-West should produce the Majority Leader; North-West, Deputy Leader; North-East, Chief Whip; and South-South, Deputy Whip.

However, the North-East and the South-South later swapped their positions, but still said they remained loyal to the APC.

An offer to Gbajabiamila to head the AdHoc Committee on Constitution Review in place of being the majority leader of the 8th Assembly, was also reportedly turned down by the former minority leader, making the crisis to rage on.

But on Monday, President Muhammadu Buhari ordered the gladiators in the  crisis  to resolve, within 6 hours, all pending issues within six hours, ahead of the resumption of house plenary Tuesday.

After the Monday meeting ended in a semblance of deadlock, hopes were low that peace will reign in the legislative business of the Lower House which resumed yesterday.

The meeting with Buhari was a further exploration of a last ditched effort to return the heated House to normal footing in line with the commitment of the president to get his cabinet together and begin work in earnest.

Since Friday, the president who had continued to stick with his principled stand to let the Federal lawmakers resolve the matter has been trying to walk the tight rope to balance the various interests involved in the face-off as the weekend meeting he had with Gbajabiamila ended with no formal commitment.

Buhari consequently called a larger meeting involving all the members. There were fears that the Monday’s resumption of the plenary may be disrupted by the Gbajiamila’s because of Dogara’s insistence on sharing the positions of principal officers according to federal character and geopolitical zonal sharing formula.

At the weekend, members of the House loyal to Speaker Dogara claimed a deal had been struck with the rival faction loyal to the leadership of the APC and Gbajabiamila, saying the crisis in the lower legislative chamber was now officially over.

But the Gbajabiamila group immediately rose against the claim, saying no agreement had been reached, and that the so-called Dogara formula remained unacceptable to their camp.

However the spokesperson of the Dogara group, Abdulmumini Jibrin, addressed a press conference in Abuja, saying an arrangement, known as the Dogara Formula, had been hammered out after extensive consultation. Under the arrangement, which he said had been accepted by members of the two rival factions, the group loyal to Mr. Gbajabiamila would produce the House leader from the North West and Chief Whip from the South South.

Jibrin said both the Speaker and a great majority of the APC caucus in the House, including “gladiators” in the Gbajabiamila’s group such as Messrs. Mongunu, Doguwa and Iriase supported and stood by the Equity Team. “We have commenced collection of signatures which has reached advanced stage to affirm the Dogara formula”, he said.

But shortly after Mr. Jibrin briefed the media, Nasir Zangon-Daura, a member loyal to the APC and Mr. Gbajabiamila, circulated a statement on behalf of his group, denying that any such agreement.

“The APC loyalists group hereby deny and unequivocally reject any purported endorsement of a so-called formula on the APC leadership in the House of Representatives,” he said, adding “Any member of the loyalist group who claims to be part of this arrangement acts on his own and not on behalf of the group”.

At the end of the meeting with Buhari which lasted about 20 minutes, members of the two factions in the House stuck to their different positions and interpreted the President’s message to them during the closed-door meeting in a manner that suited their camps.

A mild drama played out as members of the different factions struggled to grant interviews to State House correspondent. The thrust of their positions was that the president directed them to remain with the party with a view to ensuring that the APC delivers the promised change to Nigerians.

Addressing the press, Gbajabiamila said, “We are still talking. But I think this is the first time everybody is coming together in a cordial atmosphere. We came together for the first time as one family, with a lot of camaraderie. I think we are almost at the point where all of these would be behind us, hopefully by tomorrow (Tuesday).”

APC national chairman Mr. John Oyegun said, “Everything is upbeat. You can see that I am smiling. You will be very surprised that a lot was achieved in 20 minutes.

“As the chairman of the party, I can say that there are no discordant tunes. You can see the Speaker of the House standing firmly beside me and I have a feeling that in another three or four hours and by tomorrow, we will have good news for the nation. It is never too late to straighten the path.”

Speaker Dogara said, “I will always be by the party. There has never been a time that I never stood firmly by the party.

“So, like my chairman has explained, we are going to do it in consultation with the party and I’m sure that sooner than later we will have good news for Nigerians.”

And the good news came yesterday with Gbajabiamila’s emergence which is         expected to  help calm a house frayed for weeks by leadership tussle. 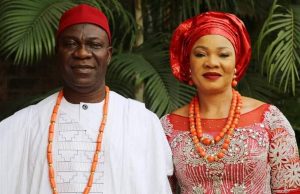