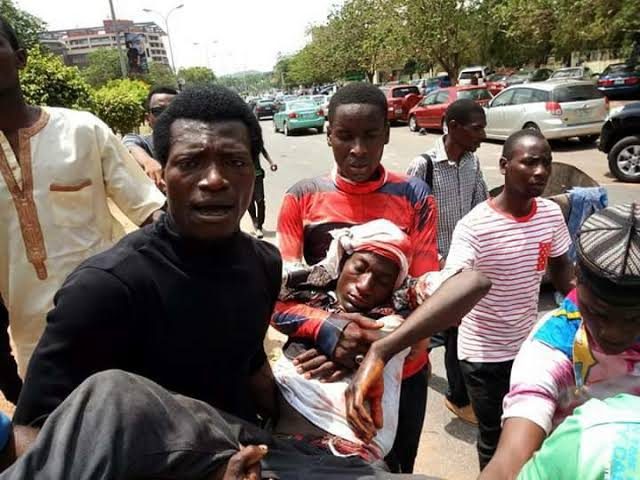 Spokesman of the Islamic Movement in Nigeria (IMN), popularly called Shiites, Abdullahi Musa, has said that 17 members of the sect were shot dead by the police in Abuja on Monday.

Musa who spoke to The Cable said while IMN was in possession of six dead bodies, the police dumped 11 corpses at the National Hospital, Abuja.

He noted that over 100 IMN members who sustained injuries during a protest on Monday were arrested by the police from their sickbed at Gwagwalada Specialist Hospital.

Members of the sect on Monday, took to the streets of Abuja in protest, to demand the release of their leader, Sheikh Ibrahim Zakzaky.

Zakzaky has has been in detention since 2015 while court orders for his release have not been obeyed.

The protest, which according to the Cable, began from NITEL junction at Wuse zone 2, was disrupted by armed policemen who cordoned off the road leading to the national assembly and three arms zone.

Bullets were fired at the protesters as they advanced towards the Eagle Square.

Musa lamented the “brute force” used by the police on peaceful protesters, vowing that the #FreeZakzaky protest would continue despite the killings of their members.

The National Emergency Management Agency (NEMA) has confirmed that protesting Shi’ites burnt down two of its emergency ambulances.

In a statement, Sani Datti, NEMA’s head of media and public relations, said the ambulances were burnt down at the agency’s emergency response and ambulance bays (ERABs) in Abuja.

He added that the ERABs were situated at the location for timely response to emergencies in order to reduce loss of lives and property.

“This is to confirm that the Emergency Response and Ambulance Bays (ERABs) of the National Emergency Management Agency (NEMA) located on Ahmadu Bello Way beside the Federal Secretariat was attacked today with two vehicles burnt down,” the statement read.

“Members of Islamic Movement of Nigeria commonly known as Shi’ites carried out the attack. The two burnt vehicles were the Mobile Intensive Care Unit (MICU), which is a life support ambulance and a multi-purpose Response Intervention Van (Rescue Tender).

“The ERABs was situated at the location for timely response to emergencies and disasters to reduce loss of lives and property.

“Director General of NEMA, Engr Mustapha Maihaja has visited the response bay and inspected the damage.”

Meanwhile, a Deputy Police Commissioner, Usman Umar Belel and a Channels TV reporter identified as Precious Owolabi were killed during a clash between IMN and the police on Monday.

Owolabi, a member of the National Youth Service Corps (NYSC) was shot at the scene of the clash.